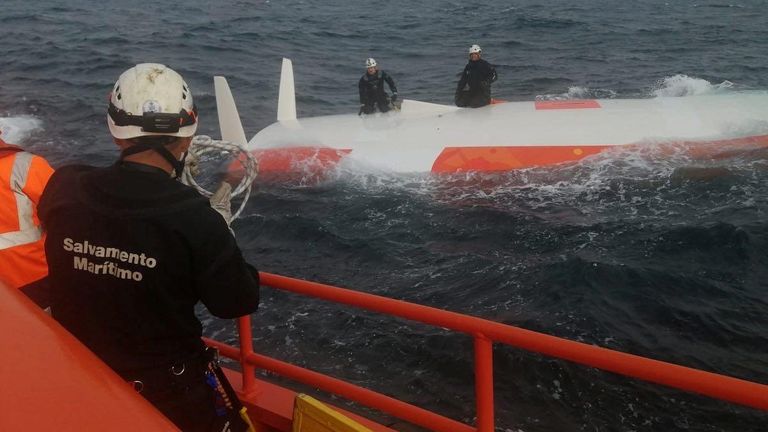 Frenchman aged 62 survived 16 hours in an air bubble in his capsized sailboat in Atlantic Ocean. He was then rescued by rescuers in an operation that was described as “verging towards the impossible”.

According to the coast guard, the 40ft Jeanne SOLO Sailor sent a distress signal Monday at 20.23 from 14 miles away from the Sisargas Islands in Spain’s northwestern Galicia.

Five divers were on board a rescue ship that set sail to rescue him. One of three helicopters dispatched to assist the search found the vessel upside down as the sun set.

Divers were looking for signs of life, so the man began to bang on the hull from the interior.

The sea was too rough at that time to rescue the ship. To prevent further sinking, the team attached buoyancy balloons on the ship’s hull and waited until morning.

Two divers were able to rescue the man from the water by diving under him.

He was flown to safety, taken to the hospital for medical checks, and released shortly thereafter with no problems.

Vicente Cobelo was a member the coastguard’s special operation team. He told a local station that the man leapt into the freezing water and then swam underneath the boat to reach sea’s surface.

He stated that he had freed himself from his suit and jumped into the water.

Floating boaters leap for joy when they are rescued in Alaska

Tracking data showed that the Jeanne SOLO Sailor had left Lisbon, Portugal on the morning of April 1.