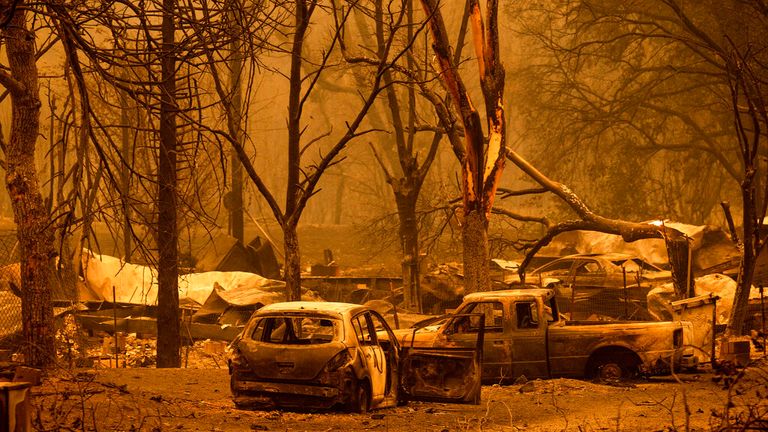 Wildfires in California and Montana have spiralled overnight, fuelled by hot and windy conditions and threatening neighbourhoods and forcing evacuation orders.

In California’s Klamath National Forest, a largely rural area near the Oregon state line, the fast-moving McKinney fire went from scorching just over one square mile (about 2.5 sq km) on Friday, to tearing across 62 square miles (160 sq km) by Saturday.

The blaze burned down at least a dozen homes, and observers spotted wildlife fleeing the area.

Klamath National Forest spokeswoman Caroline Quintanilla warned the blaze was “continuing to grow with erratic winds and thunderstorms in the area and we’re in triple-digit (Fahrenheit) temperatures.”

With lightning forecasted over the next few days, extra resources from elsewhere in the state are being brought in to help fight the region’s fires, according to the US Forest Service.

California Governor Gavin Newsom declared a state of emergency on Saturday as the fire escalated, which granted him more flexibility to make emergency response and recovery effort decisions and access federal aid.

It also allows “firefighting resources from other states to assist California crews in battling the fires”, according to a statement from the governor’s office.

Climate breakdown is increasing both the likelihood of and the surface area scorched by wildfires in the US, Europe and Australia, by creating hot and dry conditions.

More than four million hectares that burned in the US between 1984 and 2015 is directly attributable to climate change, according to a peer-reviewed study.

Meanwhile, further northeast in Montana, a wildfire nearly tripled in size to more than 11 square miles (28 sq km) near the town of Elmo and Flathead Lake.

Roughly 200 miles to the south, Idaho residents remained under evacuation orders as the Moose Fire in the Salmon-Challis National Forest burned more than 67 square miles (174 sq km) of timbered land near the town of Salmon.

A build-up of vegetation was fuelling the McKinney fire in California, according to Tom Stokesberry, regional spokesman for the US Forest Service.

“It’s a very dangerous fire – the geography there is steep and rugged, and this particular area hasn’t burned in a while,” he said.