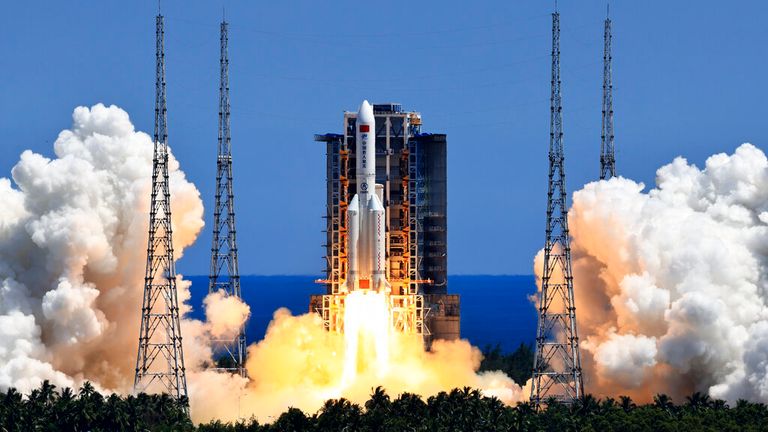 The Chinese government announced that debris from a rocket which lifted part of China’s space station into orbit fell into the waters of the Philippines.

China Manned Space Agency stated that most of the Long March-5B’s final stage burned up after it entered the atmosphere.

The agency stated earlier that it would allow the booster to go unguided.

The announcement mentions that the “landing zone” is located in waters southeast off the Philippine city Puerto Princesa, Palawan.

The Philippine authorities didn’t immediately confirm whether any victims had been confirmed.

China was previously criticized for allowing rocket parts to return to Earth uncontrolled.

After parts of a Chinese rocket fell into the Indian Ocean, Nasa charged Beijing with “failing to comply with responsible standards regarding their debris.”

After Beijing confirmed that it was losing control, Tiangong-1 crashed into the Pacific Ocean. In May 2020, a 18-tonne rocket was uncontrolled.

China was also disapproved after it used a missile in 2007 to destroy one its weather satellites. This created a cloud of debris that other countries feared could threaten other satellites.

China’s strongest rocket, the Long March-5B, launched on July 24, carried the Wentian laboratory into orbit. It was attached to Tianhe’s main module, where three astronauts are currently residing, on Monday.

After most of its cargo was destroyed on reentry, the remains of another cargo spacecraft that served the station were found in a predetermined region of the South Pacific. The government had already announced this.