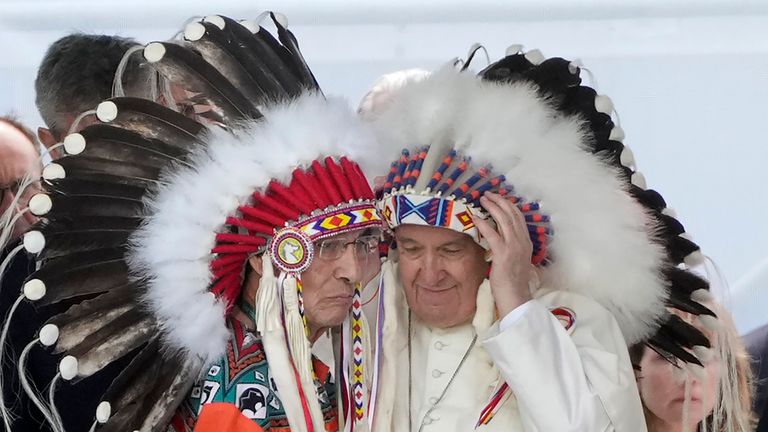 According to the pope, he is ready to resign if serious health issues prevent him from leading the Catholic Church.

Pope Francis stated that his declining years and difficulties walking have led to a slower phase in his papacy.

The 85-year old told reporters that he didn’t believe he could continue to do trips in the same way as before after a week-long trip through Canada.

The pontiff visited Canada to apologize for the Catholic Church’s involvement in schools where native children were abused.

Due to knee pain from a fractured and inflamed ligament, he has been using a cane, wheelchair, or walker for the past few months.

Francis stated, “I believe that at my age and with the limitation I have to preserve me a bit to be able serve the Church or decide to step aside.”

He previously stated that he could follow the lead of Pope Benedict, who was the first pope in 600-years to resign rather than rule for life in 2013.

It’s not unusual. It is not a disaster. He said, “You can change the pope.”

“The door is always open. It’s one of the usual options. That door was not mine until today. Although I didn’t think it necessary to consider this possibility, that doesn’t mean I won’t think about it tomorrow.

He said, “This trip was a bit challenging. This is true. I cannot make trips in such a condition. Perhaps the style needs to change. Make fewer trips, take the trips that I promised, and re-jig the things. It will be the Lord who makes the final decision. The door is always open.”

Pope apologizes for the abuse has suffered over the years

The pope wore an indigenous feathered headdress while visiting Canada. He then spoke out against forced assimilation and said that native peoples were being ripped from their culture and families.

He apologized for Christian support for the “colonising mentality of the times” and said: “With shame, unambiguously and with a deep regret, I beg for forgiveness for the evil done by so many Christians against indigenous peoples.”

From the 19th century to the 1970s, more than 150,000 Canadian native children were forced to attend Christian schools funded by the state. This was done to remove them from their cultural influences and to “Christianize” them and integrate them into mainstream society.