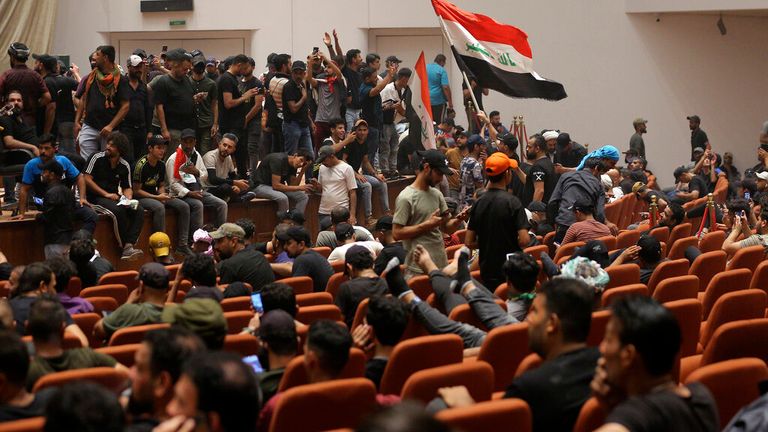 This week, thousands of protestors broke into Iraq’s parliament for the second time.

The followers of Muqtada Al-Sadr, a prominent Shia cleric are protesting against attempts by Iran -backed political parties to form the next government.

In an attempt to stop people from entering the parliament building of the capital Baghdad, security forces used tear gas and sound bombs.

At least 60 people were injured in clashes that occurred on Saturday. The expected parliament session was cancelled.

As Iraq faces political impasse, protests broke out. The stand-off has left ordinary Iraqis most affected.

His party, Mr al-Sadr, came first in an October general election but was not able to win a majority. Nine months later, there has not been an official government.

After failing to form a government with Shi’ite rivals, the party quit talks in June. The party was mainly supported by Tehran.

The Coordination Framework bloc, which is led by Iran-backed Shiite parties and their allies was redrawn with the majority of the necessary resources to continue its work.

After protesters stormed Iraqi Parliament on Wednesday to protest Mohammed al Sudani’s nomination for the Iraqi premiership, at least 70 were injured

Al-Sadr insists that any new government must be free from foreign influence and corruption which have plagued Iraq for many decades. He has threatened civil unrest if the new regime is not approved.

Raad Thabet (41), said that he was among those in the crowd. He stated: “We came here today to remove corrupt politicians and prevent them holding a session of parliament, and to stop the framework from forming government.

Abu Foad, another protestor, stated: “We are calling to a government that is free from corruption, and those are our demands.” 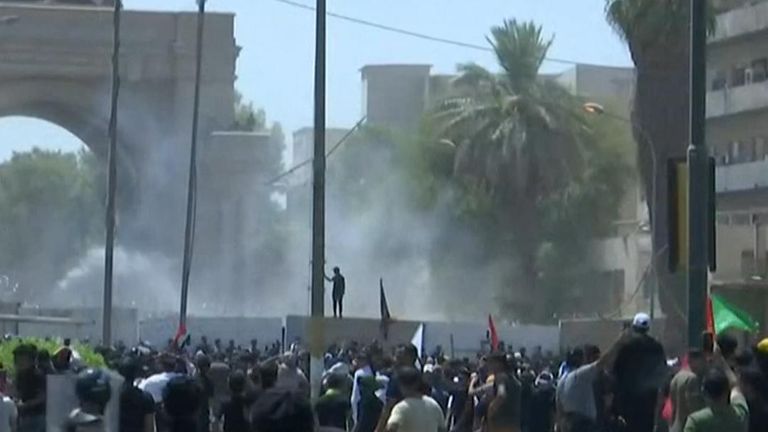 Police and protestors clash in Iraq

Political impasse is made worse by the fact that Mr al-Sadr’s loyalists are involved with running the country, and hold influential positions within Iraqi ministries and state organizations.

Mustafa al-Kadhimi, the interim prime minister, urged protesters to “immediately retreat” and urged them to be calm and restrained.

On Saturday, a statement was posted to his official Twitter account stating that Mr al-Kadhimi “directed security forces protection of demonstrators” and urged the demonstrators not to escalate their movements and to follow the instructions of security forces whose goal it is to protect them and protect official institutions.

Continue reading: Protest over the nomination of PM in Iraq


Why is Iraq stuck in political impasse?

Since Saddam Hussein’s fall in 2003, the selection of the president and prime minister has been painfully slow.

The former leader in Iraq warned Americans that they would not be capable of running the country after the war. This was because they didn’t understand the language, history or “Arab mind”.

An ex-CIA analyst who briefed the captured leader said that Islamic State might not have gained ground in Iraq if Hussein had stayed.

After a boycott by Iran-backed organizations, the Iraqi parliament failed to vote again for a president in March.

Al-Sadr hoped that Rebar Ahmed Khalid would be elected, a veteran Kurdish intelligence officer and interior minister for Iraq’s autonomous Kurdistan Region in the north.

Only 202 of the 329 members attended the vote, which was less than the minimum two thirds required to elect a new president. 126 officials also boycotted the session.