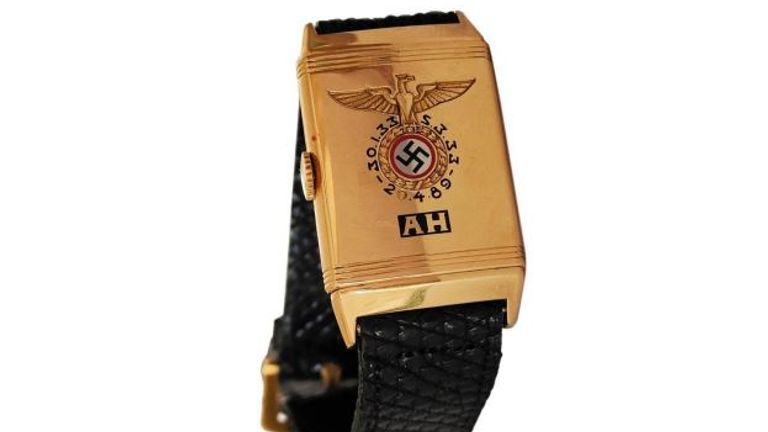 An anonymous bidder purchased the Huber timepiece with a swastika and Nazi eagle as well as the initials AH.

The auction house stated that it was trying to preserve the past.

According to the catalog description, the watch was given to Hitler as a birthday gift in 1933, which was the year he became chancellor of Germany.

The watch was taken as a’spoils war’ by 30 French soldiers who stormed Hitler’s Berghof retreat in Bavaria’s mountains.

The item was then resold, and passed down through the generations.

Other items included Wehrmacht toilet tissue, cutlery, and champagne glasses from senior Nazi figures. Also, items owned by Eva Braun, Hitler’s partner and including a collar for her dog, were auctioned.

In an open letter, the 34 Jewish leaders called the sale “abhorrent”.

Chair of the Brussels-based European Jewish Association, Rabbi Menachem Margolin said that the auction was doing two things. One, it is giving support to those who believe in the Nazi party.

“Two”: Offers buyers the opportunity to entertain a guest or loved-one with an item belonging a genocidal killer and his supporters.

He said, “While it is evident that lessons from history must be learned – legitimate Nazi artifacts belong in museums and places of higher learning – the items you are selling clearly don’t.”

“That they are sold on the open market to the highest bidder is an indictment of our society. One in which the memory and suffering of others is overridden by financial gain is a shame.”

Alexander Historical Auctions stated that most of its collectors either kept the items or donated them to Holocaust museums all over the world in comments to German media.

Mindy Greenstein (senior vice president, Alexander Historical Auctions) stated that “if you destroy history there is no evidence that it ever happened.”

It doesn’t matter what kind of history it is, it must be preserved.