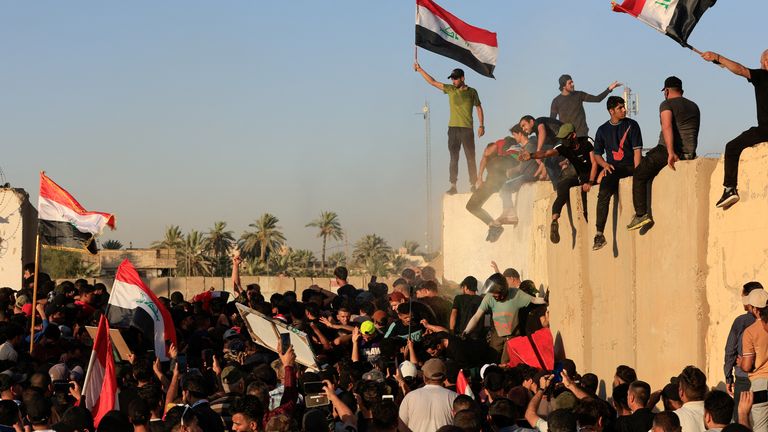 In protest of the Iran-backed parties’ selection of a prime minister nominee, hundreds of Iraqi protestors have stormed Baghdad’s parliament building.

Only security personnel were present in the building, and they seemed to let the protestors in with relative ease.

Many of them were followers of an influential clergyman and were often seen standing on tables waving Iraqi flags.

This breach occurs amid the largest protest since October’s Iraqi election.

Protestors were protesting against Mohammed al Sudani’s recent nomination as the official nominee for the Co-ordination Framework bloc. This coalition is led by Iran-backed Shiite groups and their allies.

Many people broke into the area’s gates, which house foreign embassies and government buildings.

Demonstrators marched down the main thoroughfare of the zone, and dozens gathered outside the doors to parliament.

Mustafa al Kadhimi, the interim prime minister, called for calm and restraint and asked that protesters “immediately leave” the area.

The demonstrators were mostly followers of Muqtada Al Sadr, an influential Shiite cleric who won the most seats in October’s federal election.

Al Sadr supporters stormed parliament in a similar manner in 2016.

After Haider al Abadi, then-prime minister, sought to replace party-affiliated Ministers with technocrats as part of an anti-corruption drive, they staged a sit in and demanded political reform.

To face Mr. al Sudani in parliament as the premier-designate, parties first need to select a president.

After he failed to convince enough legislators to vote for him, Mr. Al Sadr quit government formation talks.

The Framework leader replaced his legislators and pushed forward to form the next government.

Many are afraid that doing so could lead to street protests organized by Mr al Sadr’s large grass roots and instability.