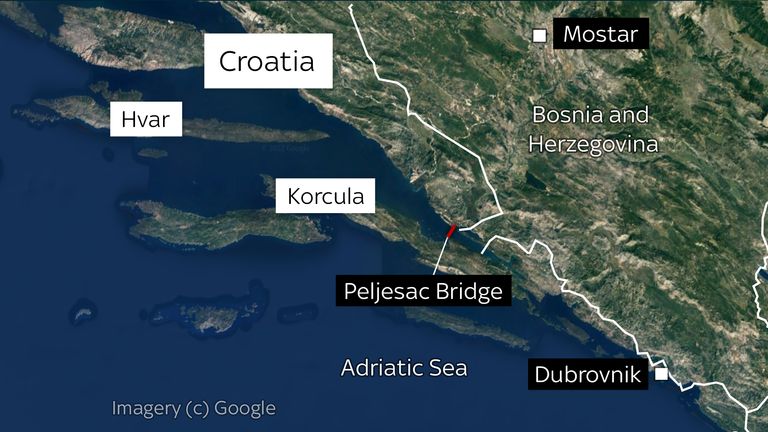 The long-awaited bridge linking two areas of Croatia’s Adriatic Sea coast was officially opened Tuesday. It has been called a historic day for generations.

The structure, which spans 2.4km (1.25 mile), connects the mainland with the Peljesac peninsula to the south. This allows for easier access to Dubrovnik, the country’s most popular tourist attraction.

When the Yugoslav Federation collapsed in the 1990s, the two Adriatic Sea coasts of Croatia were separated by a narrow section of Bosnia.

However, the split required residents and tourists to go through border checks. This slowed traffic and left people in south Croatia isolated from the rest.

The bridge will now pass through the Bosnian area.

After the bridge was officially opened to pedestrians, then motorists, hundreds of people raced to be the first to cross it on foot.

On state HRT television, the opening was described by HRT as “a historic day that generations have awaited”.

Andrej Plenkovic, Prime Minister of Croatia, stated that it was a historic day for the country. Let’s celebrate it today!

The China Road and Bridge Corporation won an international tender for the construction of the bridge in 2018. This was despite concerns about Beijing’s efforts to increase its economic influence by investing in infrastructure.

The bridge was criticised by Bosnian officials for alleged unresolved border problems and concerns that it might hinder access to their coastline.

Croatia’s economy is dependent on tourism, which remains one of the most fragile in the EU.

The country has cleared all obstacles to adopting the euro. This will allow it to be the 20th member in the eurozone starting next January.

It will be a huge success and all the people living in the Eurozone who travel to Croatia, which is 340 million, will no longer have to exchange cash for Croatian kuna.