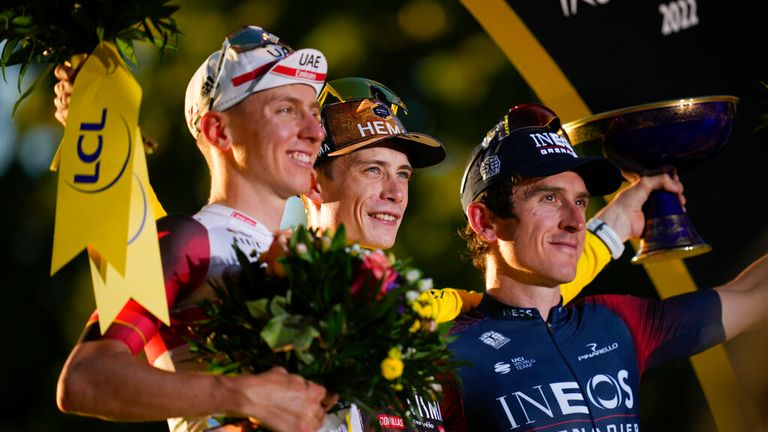 On Sunday’s ceremonial final stage in Paris, the Dane crossed the line in safety with his teammates. He decided to join the celebrations in the main group rather than compete for the first crossing.

Vingegaard won the overall tour win comfortably, beating Tadej Pogacar from Slovenia by more than three and a half minutes.

After crossing the line, the Dane exclaimed: “It’s just unbelievable.”

“I’ve won the Tour. Nothing can go wrong now and I’m here with my daughter, and it’s incredible.

“It’s the largest cycling race of the year, and the biggest you can win. Now I’ve done it, and no one can take this away.

“I am super happy about my win now. Although I’m happy to celebrate and to be relaxed, I still want more.

Vingegaard won also the polka dots jersey. This is given to the rider with the most points on the various stages of climbing.

The Welshman stated, “I’m still making it the best of it.”

“I’ve often said that I’m closer to the end than the beginning of my career, so make sure you really take in the experience, enjoy it, and remember days like these because they don’t come around very often.”

Tradition has it that the battle for the yellow jersey is wrapped up on Saturday’s last time trial stage so that most riders can enjoy Sunday’s sprint through Paris with champagne while the sprinters take center stage.

Instead, Jasper Philipsen from Belgium won the sprint finish in Paris sunshine’s final stage. He was followed by Dylan Groenewegen from the Netherlands and Alexander Kristoff from Norway.

Philipsen said, “It’s unbelievable, it is a childhood dream coming to life,” after he won his first Tour victory on stage 15 at Carcassonne. It will take some time to realize this. The team is just amazing. The cherry on top is that we were able to finish the Tour this way.

It was perfect for me. I was in a good position, and Dylan had to launch early so I could stay in his car and finish my last sprint when I wanted. I feel super proud and happy – winning on the Champs Elysees is the ultimate goal for any sprinter.”

The green jersey was awarded to the rider with the most points in sprints to Belgium’s Wout Van Aert.