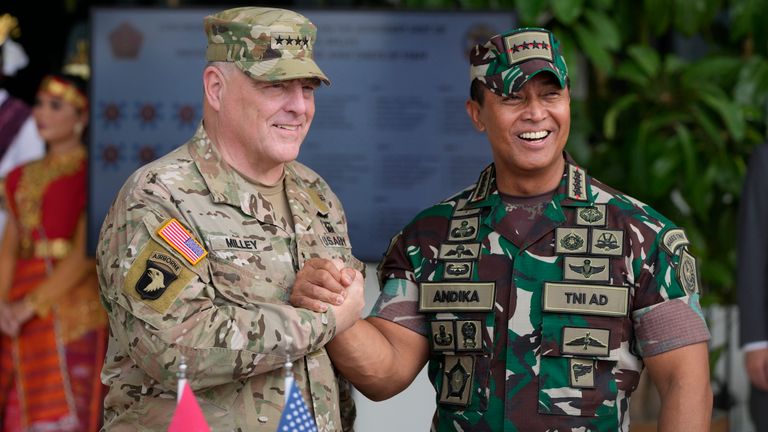 The top US military officer warned that China’s military has become more aggressive and dangerous over the past five year.

General Mark Milley of the Joint Chiefs of Staff spoke in Indonesia and stated that the number of intercepts made by Chinese aircraft and ships in Pacific regions on US and partner forces has increased dramatically over the past decade.

He said that the number of unsafe interactions has increased in similar proportions.

He stated that the message was that the Chinese military has become more aggressive in this region, both at sea and in the air.

To counter China’s threat, the US is intensifying its efforts to build relationships with Pacific countries to increase its presence and influence in the region.

The administration of President Joe Biden has declared that China is the US’s “pacing menace” and its primary long-term security threat.

Gen Milley’s trip is focused on this threat, as he meets Indo-Pacific chiefs for defence in Sydney, Australia.

The need for a peaceful, open, and free Pacific as well as China’s rapid military growth will be key topics.

Taiwan will be a major focus as US military officials claim that China could invade Taiwan. Beijing regards Taiwan as a breakaway territory.

As China attempts to intimidate Taiwan into joining the mainland, Chinese military provocations have intensified against Taiwan.

Washington officials claim that Beijing is ready to move on the island by 2027.

Taiwan is Taiwan’s principal ally and defense weapons supplier. The US law requires that the government treat any threats to Taiwan as matters of “grave concern”.

However, the law doesn’t explicitly state if the US military would protect Taiwan in the event of an attack by China.

In a phone call on July 7, General Li Zuocheng (China’s top military officer) told Gen Milley that Beijing had “no room to compromise” on Taiwan issues.

He stated that military collusion between Taiwan and the US must be stopped and Washington must “avoid affecting China-US relations and stability in Taiwan Strait”.

Recent US visits to the region have included high-profile visits by Lloyd Austin, defense secretary, and Antony Blinken, secretary of state.