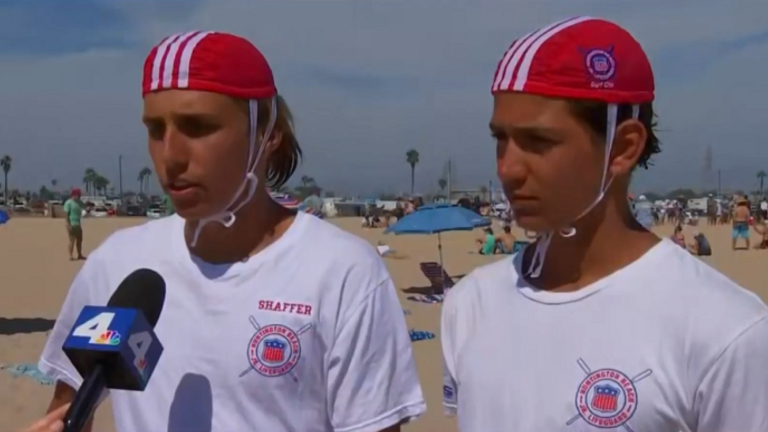 A video has emerged showing a plane colliding into the ocean off a California beach… right in front 600 lifeguards.

The light aircraft plunged into the water and ended up perpendicular to its nose in the surf before it settled down the right direction.

The impact occurred on a stretch where 600 junior guards were demonstrating their skills.

Amazingly, the plane struck the sea during competition rounds, so nobody was in the water at that time.

Footage shows a uniformed lifesaver dressed in red shorts, rushing into the water while holding a rescue board.

Aidan and Jake Shaffer, junior lifeguards, rushed to the water.

Aidan spoke to NBC News and said that Jake went, “OK, run!” Aidan said, “Jake goes, ‘OK! Run!'” So I run towards the waterline to grab a board and he runs.

Shaffer described the pilot in a young man’s flannel shirt.

According to the lifeguard, “When he got onto my board, he had a slight cut on his forehead.”

“We were just going through these things in captain’s to try and learn more about the person. Imagine what could have happened. He was not interested in talking. He was frozen on the table.

Seniors advised the children to remain on the shore, while professionals raced to reach the scene of the accident – approximately 27 metres away.

Corinne Baginski’s 17-year old daughter was participating in the event. She confirmed that the Piper Cub-looking plane did not crash during swimming.

According to Huntington Beach spokesperson, the pilot was able to climb out of the plane on his own. He was then seen riding in the back of a lifeguard vehicle and was later taken to the hospital with bruises and bumps.

The Federal Aviation Administration is currently investigating the incident.