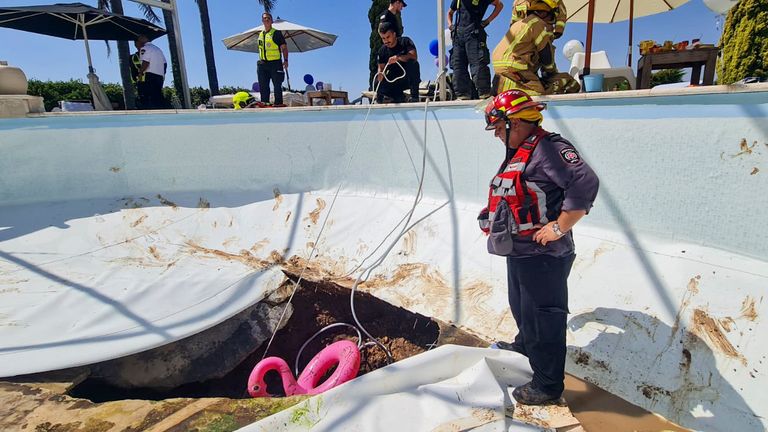 After a man drowned in a pool sinkhole, two Israelis were arrested.

According to Israeli news reports, Klil Kimhi 32 years old was in the pool when the sinkhole burst and he was pulled into the 13-metre deep cavity.

He was at Karmei Yosef’s villa, approximately 25 miles west from Jerusalem, to attend a party with colleagues from his marketing company.

Rescuers had to wait four hours to reach him. They were careful as more sinkholes might have been created. But he was already dead.

Police stated Friday that two women in their 60s were suspected of causing death through negligence.

They appeared in court, and were released for five days under “restrictive circumstances of house arrest”.

Witnesses claimed that nearly 50 people were present at the party, while six were in the pool.

It was also claimed that the villa’s owners had constructed the pool without the proper permits.

The scene was captured on video, with the pool water being drawn into the huge hole. Partygoers attempted to hold onto things to prevent themselves from being taken in.

Inflatables found in the pool were swept into a hole and then vanished.

The Jerusalem Post was told by Paramedic Uri Dmari that this is an unusual case.

“I saw a pit at the bottom of the pool when I arrived at the scene.

“People who visited the site said that the pit opened abruptly and within a matter of seconds, all the water from the pool was drawn in.”

Another 34-year old man was also taken into the hole, but escaped with only minor injuries to his head & limbs.