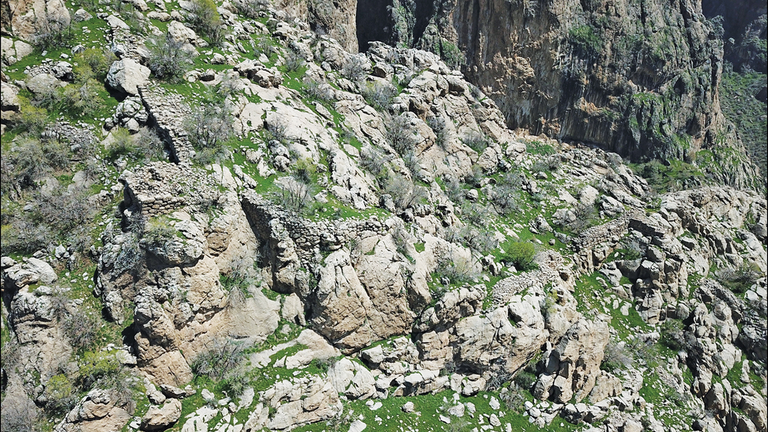 Scientists may have discovered evidence of a lost royal city, where worshippers offered prayers to a water goddess 2,000-years ago.

We know very little about Natounia. It is believed that it was part of the Parthian Empire.

Researchers now think they know where it’s located – at the site of an ancient fortress that once stood in Iraqi Kurdistan. This location has been under investigation for over a decade.

This intriguing hypothesis was created by Dr Michael Brown, an archaeologist at Heidelberg University in Germany who collaborated with Iraqi colleagues to create it.

Their research, published in Antiquity, shows that Rabana-Merquly, a mountain fortress, was once a key regional centre of Parthian Empire. This sprawling power spanned parts of Iran, Mesopotamia, and other areas around 2,000 years ago.

The settlement was located on the flanks Mount Piramagrun, in the Zagros Mountains. It boasted fortifications that stretched for kilometers and two smaller settlements.

It was high up on a mountain so mapping it required drones.

Between 2009 and 2022, multiple excavation campaigns were undertaken to allow the international team of researchers access to the site’s archaeological remains.

A large portion of the fortress is remarkable in its preservation and includes structures that indicate a military purpose.

A sanctuary-style complex was also found, where heavy rains would create a waterfall into an enormous stone structure with a staircase carved in the rock.

Researchers believe that the prominent water symbol suggests a cultic connection to Anahita, a Zoroastrian Iranian goddess who was venerated for her divinity of the Waters.

The research team also suspects that Rabana Merquly could be the lost royal capital of Natounia.

The existence of Natounia or Natounissarokerta on the Kapros was only documented on seven bronze coins from the first century BC.

One scientific interpretation states that the name Natounissarokerta refers to the royal name Natounissar (the founder of Adiabene’s royal dynasty) and the Parthian word meaning moat or fortification.

Dr Brown states that this description could be applied to Rabana Merquly.

Dr Brown thinks the wall reliefs at the entry to the fortress could depict the city’s founder, Natounissar, or a descendant.

According to him, the relief looks like a likeness to a king found in Hatra (a location rich in Parthian finds) approximately 230 km away.

He said, “The immense effort required to plan, build, and maintain a fortress this large points to government activities.”

The investigation of Rabana Merquly is part a larger investigation into Parthian settlements in the Zagros highlands, on both sides the Iran-Iraq border.

Dr Brown worked with colleagues from Sulaymaniyah’s Directorate of Antiquities during the most recent excavations. This is a city located in the autonomous region of Iraqi Kurdistan.

Continue reading: Climate change is behind the rise and fall ancient Indus Valley Civilisations, according to study