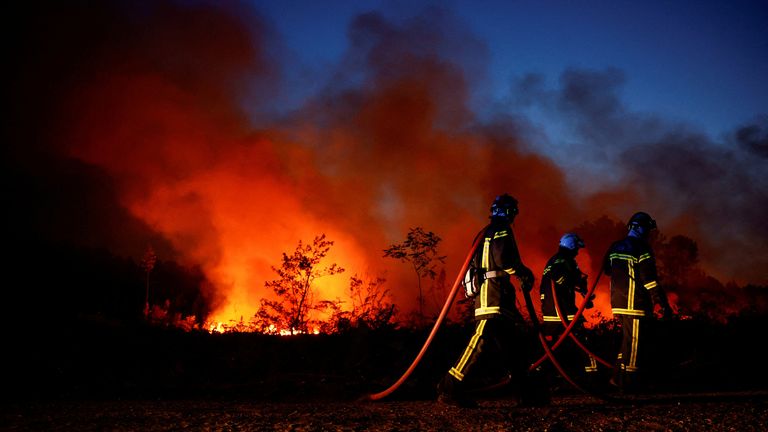 As a result of the ongoing heatwave, thousands have had to flee their homes to escape wildfires in France and Spain.

Two people were killed by fires in Spain. The prime minister of Spain linked the deaths to global heating and said: “Climate Change Kills.”

This is in addition to the many heat-related deaths that have been reported in Iberian Peninsula. High temperatures have gripped Europe and triggered wildfires across the region, from Portugal to the Balkans.

Extended droughts are common in some areas, such as northern Italy.

France broke heat records and swirling hot winds made it difficult to fight fires in the country’s southwest.

Marc Vermeulen, chief of regional fire service, said that the fire was literally exploding. He described tree trunks breaking as the flames consumed them. This caused the fire to spread further, sending burning embers into air and spreading the fires.

He said, “We are facing extreme and extraordinary circumstances.”

Authorities moved another 14,900 people out of areas that were at high risk of being in the path fires and evacuated additional towns.

Since the wildfires started 12 July, more than 31,000 people were forced from their homes and summer vacation spots within the Gironde region.

Six other planes had already arrived to fight the flames. Three more were dispatched to collect seawater and make repeated runs through thick clouds of smoke.

More than 200 additional firefighters were dispatched to Gironde to join the 1,500-strong firefighter force.

Spain reported another fatality within two days while fighting its own fires.

A 69-year old sheep farmer was found dead on Monday in the same hilly region where a 62 year-old firefighter was killed in flames in northwestern Zamora.

Over 30 forest fires in Spain have caused the evacuation of thousands and blackened 85 sq. miles (220 km) of forest.

A train that ran through Zamora gave passengers a terrifying, up-close view of a fire when it stopped in the countryside.

Video captured about 12 passengers alarmed at the sight of flames on the tracks.

Train in Spain surrounded by wildfires

Although the heat wave in Spain is expected to ease by Tuesday, the relief will be short-lived as temperatures rise on Wednesday, particularly in the western Extremadura region.

Heatwave in photos: Wildfires across Europe and droughts.

Although the Balkans are expected to feel the most heat this week, they have already experienced sporadic wildfires.

Authorities in Slovenia reported Monday morning that firefighters had managed to put out one fire.

Official advice on how to keep safe from the heat

In rooms that are facing the sun, close curtains

Wear a hat with a wide brim and sunscreen when you are out in the sun.

Make sure you are storing medicines according to the instructions. Also, make sure your refrigerators, freezers, and fans work properly