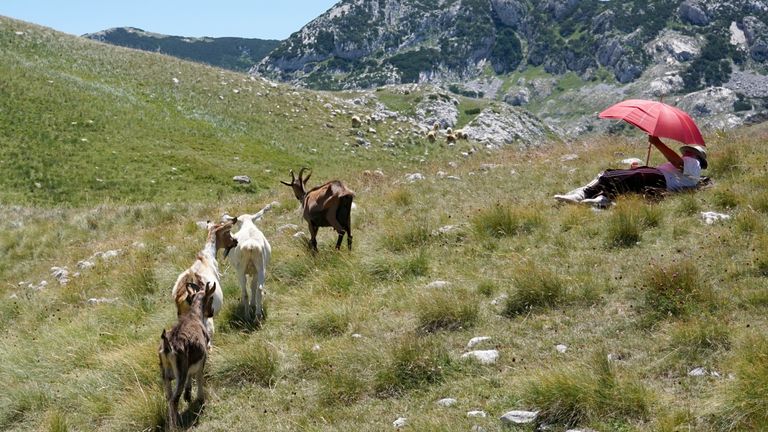 Europe is experiencing a heatwave, with temperatures reaching a record high in Spain, Portugal, Greece, and Montenegro.

Spain has seen fires erupted as temperatures reached over 40C. Helicopters and firefighters work together to contain the many burning fires that were started during the second Heatwaveof this year in Guadapero (Spain).

Madrid Zoo animals were given watermelon ice pops to keep them cool. People at Madrid Rio Park have also been cooling themselves off by the fountain.

Northern Italy is facing the worst drought in 70-years. The Po, its longest river near Turin, has dried up. Forecasters predict temperatures in many areas of the country in the 30s and 40s this weekend. The heatwave is expected to last for around 10 days.

Catania residents take a dip at the sea during the second heatwave.

As climate change brings extremely hot summers, dangerous blazes are blazing across Portugal. As the World Meteorological Organization issued health warnings, hundreds were forced to leave their homes. The air is filled with smoke from forest fires and hot winds.

As authorities warn of extreme temperatures, Montenegro’s Durmitor mountain is home to shepherds.

As temperatures rose to 40C, people have also gathered on Alimos beach in southern Greece. Civil protection officials say that high temperatures and drought conditions have increased the likelihood of forest fires.