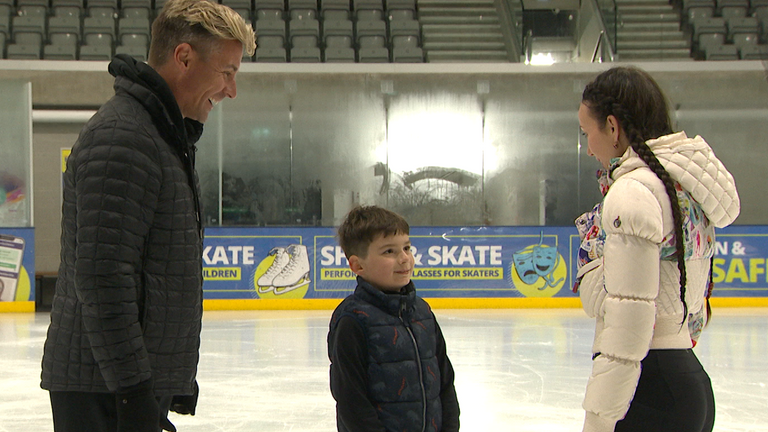 After being featured on Sky News, a seven-year-old Ukrainian figure skater fled war and now lives in Bristol. He received training from a Dancing On Ice pro-skater.

Gosha Mandziuk competed at national level back in his home country and trained six days per week. However, the conflict forced him to quit his practice.

The UK ice-skating community has rallied behind him, including Matt Evers, a US pro-skater who has appeared in all series of the ITV program.

Matt said, “Seeing and hearing his story really pulled me at my heartstrings.”

“I believe that as professional skaters and working with 15 celebrities on Dancing On Ice we can see certain things that a coach or skater might not.

“I can see his potential from the tapes and from the time you guys filmed him, so I’m sure he has a lot of potential.” He’s talented, even from the way he stands on his skates.

She stated, “I have been teaching him strong lessons. To get him to stretch his legs and arms, to look up at the ice, to increase his confidence, and to encourage him to do so.

“He is a brave little boy for having gone through all that he has. We just want to help him in any way we can.”

Gosha and Iryna, his mother, moved in with a host family to Bristol in April.

Sky News spoke to her about how overwhelmed they are by the support they have received.

“We’ve met many amazing people since the last filming. It is hard to believe that so many people want to help, to assist. He is sure to feel more confident now.

He has been given a lot of instruction, he takes to the ice and has new skates. His skating is smoother now that he used to be.

Iryna’s husband is still in Ukraine, and Iryna hopes that they will be able to return home soon.

She stated that Gosha is hardworking. You must work hard to be a talented player in this type of sport.

We must return. This is his labor, his effort since he was just four years old. We don’t want it to be lost. We miss our home, our country, our family, and our coaches so we would like to return.

Matt said that he will continue to support Gosha until then.

“I will follow his journey and who knows, maybe in a few decades, he’ll be on Dancing on Ice. You never know!” He said.