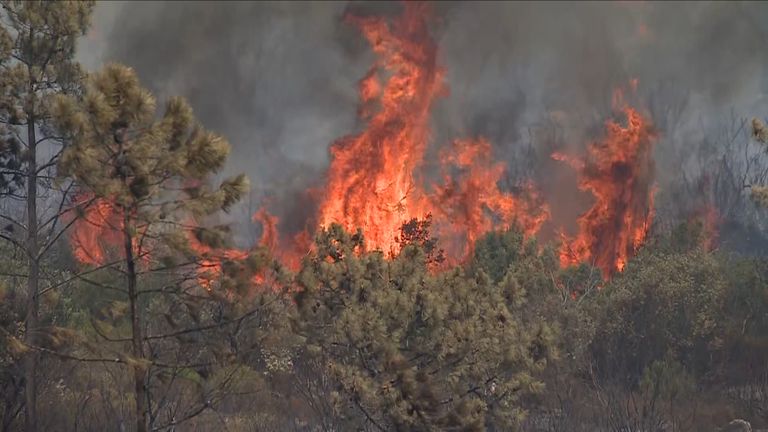 29 people were injured in forest fires in Portugal. Temperatures are expected to rise to 45C (113F in some parts) starting Tuesday.

Saturday saw 125 fires in the country, which was the most since the beginning of the year. Around 1,500 firefighters were on hand to fight three large blazes.

From Monday 15 July to Friday 15 August, the government declared a national emergency.

High temperatures have caused additional concerns about the weather for next week.

The Portuguese weather agency forecasts temperatures up to 45C (113F in Alentejo) starting Tuesday. Other regions of Portugal are expecting temperatures in the 30Cs and 40Cs.

According to the agency, winds up to 40 mph are possible in some regions.

Unseasonably high temperatures have been experienced in many parts of Europe, including southern and western Europe. Experts link the unusually hot summer to climate change.

Marcelo Rebelo de Sousa de Portugal, the president of Portugal, has cancelled his trip for a United Nations meeting in New York.

A few villages in Portugal were evacuated Saturday but only a few homes sustained damage.

Antonio Costa, the country’s prime Minister, asked Twitter users to refrain from using heavy machinery or fire, as it could cause more fires.

According to the European Commission’s executive arm the European Union, climate change is putting the continent at risk of natural disasters like droughts and wildfires.

On Friday, 1,000 firefighters battled a large fire in the south-east France forest. They were accompanied by water-dropping aircrafts.

Temperatures in Spain are expected to rise to 42C (107F) this weekend, with some areas bordering Portugal.

According to government data, Spain’s June rainfall was only half of the 30-year average.

It has also been experiencing a heatwave this summer that has seen it suffer its worst drought for 70 years, which has caused concerns about crop harvests.