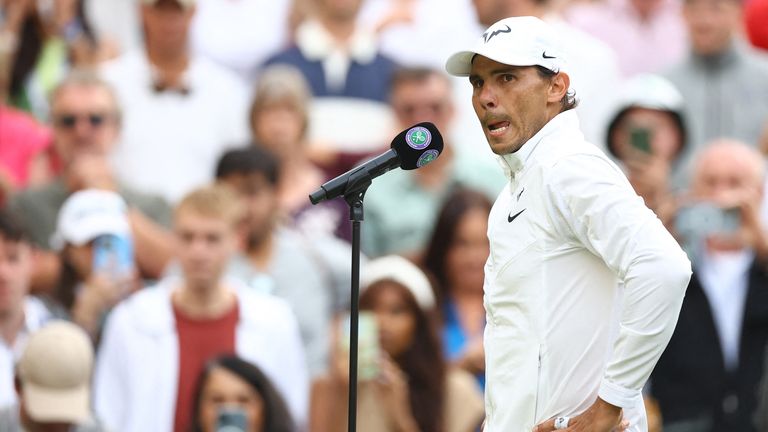 Rafael Nadal has pulled from Wimbledon, meaning Nick Kyrgios will have a bye to Sunday’s final.

Nadal went to court this afternoon, despite having suffered an abdominal injury. Reports in Spain claim that he had suffered a 7mm tear of a muscle.

Two-time Wimbledon champion appeared set to retire after his quarter-final victory over Taylor Fritz, but he won in five sets after four hours 20 minutes.

He was stooping on his stomach, and sometimes appeared so in pain that his sister and father, who were watching from the box, gesticulated for him to stop the match.

During his quarter-final match, the second seed player was treated for medical reasons.

Nadal was then asked about his chances of recovering in time for Kyrgios’ match. He replied: “I don’t know.” “Honestly, I don’t know the answer.”

Nadal announced his resignation by saying: “I was thinking throughout the day about the decision to take but it doesn’t make any sense, even if my career is to continue.”

“It’s very difficult circumstances, but it is evident that if I continue to push the injury will get worse and worse.”

The 36-year old said that he was very sad to have to leave the legendary tournament.

“I can’t see myself winning two matches, and for my own self-respect, I don’t want go out and not to be competitive enough.”

“My career was very different a few weeks ago because of my foot injury.

Cameron Norrie is British number one and reached the semi-finals at Wimbledon, defeating David Goffin

“Happiness is more important than any titles. I won’t take on that match, and will not stay more than three months away from the competition.

“It is very difficult and I am very sad.”

He has since confirmed that he will not be continuing.

Nick Krygios will play the winner of the semi final between Cameron Norrie, Britain, and Novak Djokovic, the defending champion.

Wimbledon has never seen a walkover to the final.