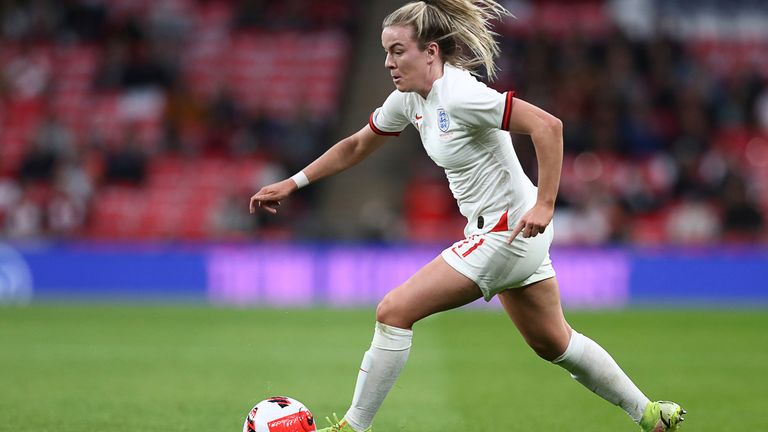 A year after England football fans suffered heartache as Gareth Southgate’s team lost in the Euros final, the Lionesses are aiming to go one better and win the women’s tournament.

The Women’s Euro 2022 Championship kicks off on Wednesday when England take on Austria at Old Trafford – with the hosts one of the favourites for the title as they hunt for the first piece of major silverware in their history.

Here, Sky News looks at nine players who are expected to shine at the tournament over the next month, with the winning team set to be crowned at Wembley on 31 July.

While England’s squad includes some familiar names including record-goalscorer Ellen White and Barcelona’s new signing Lucy Bronze, it is 21-year-old Lauren Hemp who is being talked about as the potential star for the Lionesses at the Euros.

The Manchester City winger has won plaudits for her eye-catching runs and goals and will hope to make her mark in her first major international tournament.

She won a record fourth PFA Young Player of the Year award after finishing as City’s top scorer last season with 21 goals, while also registering 10 assists.

Hemp has also impressed on the international stage, scoring four goals in England’s record 20-0 win over Latvia in November.

A player who could prove the standout of the tournament is Spain and Barcelona’s Alexia Putellas.

The midfielder is the current holder of the women’s Ballon d’Or, the award given to the footballer voted the best in the world, and she was the heartbeat of Barca’s team, which won a domestic treble last season and the Champions League in 2021.

The 28-year-old scored 18 league goals last term and was the top-scorer in the Champions League after scoring 11 times, all from midfield.

Legendary former Barcelona playmaker Andres Iniesta described Putellas as “a role model” and said she “displays what a club wants to display”.

The winner of the inaugural women’s Ballon d’Or in 2018, Norway’s star striker Ada Hegerberg played a key role for French club Lyon as they won the Champions League this year.

She returned to the Norway team in March after five years away because she had been unhappy with the way women’s football was being run in the country.

The 26-year-old is the record goalscorer in the women’s Champions League with 59 goals in the competition.

Hegerberg was involved in an infamous incident when she collected the Ballon d’Or in 2018 after host Martin Solveig asked her to twerk on stage. He later apologised after being accused of sexism.

The Denmark captain is the world’s most expensive women’s footballer after Chelsea reportedly paid German club Wolfsburg £250,000 to sign her in 2020.

Denmark finished runner-up at Euro 2017 and will be aiming for another successful run this year, with Harder leading their efforts once again.

The 29-year-old has won the league title in every season since 2016 – with Swedish team Linkoping, Wolfsburg and Chelsea – and she will now be looking to win her first international trophy.

Harder is in a relationship with Chelsea teammate and Sweden international Magdalena Eriksson, with the couple pledging 1% of their salaries to the Common Goal project to help tackle social issues.

The Dutch striker was one of the stars of the last Euros in 2017, scoring twice in the final as the Netherlands – then managed by current England boss Sarina Wiegman – claimed the trophy on home soil.

As well as being her country’s all-time top scorer, the Arsenal star is also the record holder in the England Women’s Super League with 74 goals.

She scored 14 league goals for the Gunners last season, after which she ended uncertainty about her future by signing a new contract with the north London club.

The Liverpool midfielder is the most prominent figure in the Northern Ireland women’s team, which is making history as they make their major tournament debut.

Furness helped her national team secure their place in the Euros with a play-off win over Ukraine in April last year.

The 34-year-old then became her country’s record scorer with 38 goals in a victory over North Macedonia in November.

She was subsequently named BBC Northern Ireland Sports Personality of the Year.

The forward was recently one of the most sought-after signatures in women’s football when her contract at Swedish club BK Hacken was up.

She decided on a move to Arsenal in January and has settled in seamlessly at the north London side, forming a partnership with Vivianne Miedema.

Technically gifted, the superb timing of her runs enables her to steal in behind the defence at the right moment.

Blackstenius was integral to Sweden’s silver medal-exploits at Rio 2016 and Tokyo 2020 and will hope to spearhead another drive on the international stage for the team, who are ranked second in the world.

The France forward is tipped by many for the golden boot at the Euros after scoring more than 20 goals in each of the last five consecutive seasons for her club Paris St Germain.

If France are to have a strong tournament, a lot will depend on the form of the 23-year-old, who is a product of PSG’s academy.

The France squad has been in turmoil with star player Amandine Henry – who scored for Lyon in their Champions League final win over Barcelona – not going to the Euros after a fall-out with coach Corinne Diacre.

PSG player Kheira Hamraoui is also absent from the squad after she was involved in a horrific incident when she was attacked by two masked men and repeatedly hit with an iron bar.

Hamraoui’s clubmate, French midfielder Aminata Diallo, was arrested in connection with the attack but released without charge a day later.

Voted Germany’s player of the year last year, Lea Schuller has the best international record out of anyone in their squad.

The Bayern Munich forward scored 16 goals in 22 games this season – and has 25 goals in 38 games for Germany.

Germany have won eight of the last 10 European Championships and will be keen to make sure their quarter-final exit in 2017 was merely just a blip.