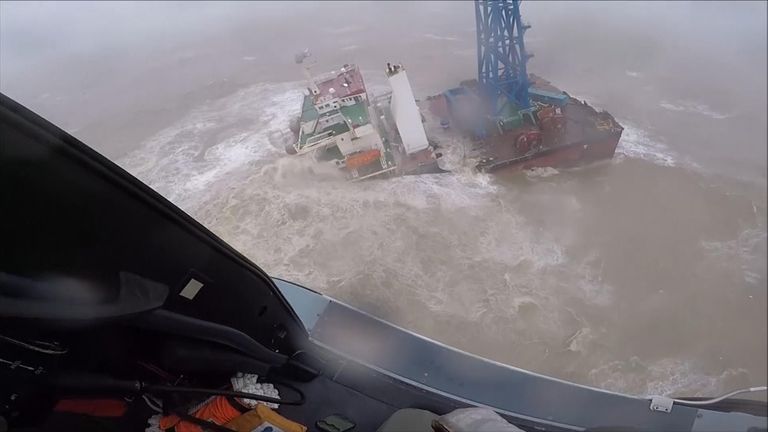 A ship that was hit by a tropical storm snapped in half, leaving behind more than twenty-six crew members.

After Typhoon Chaba created dangerous conditions in the South China Sea, workers were forced to abandon their industrial vessel. This hampered rescue efforts.

Dramatic aerial footage captured people being lifted into a helicopter, by emergency crews. At least three members of the 30-strong crew were brought to safety at around 5.30pm local on Saturday (around 10.30 GMT).

Typhoon Chaba is the first year-end storm to strike China. It will bring record rainfall to Guangdong (located around 137km/85 miles from Hong Kong).

Six aircraft were dispatched by the Hong Kong Flying Service. Crew members reported that they were experiencing difficulties due to the storm.

According to the National Meteorological Centre, Chaba (the Thai name for the hibiscus flowers) made landfall in western Guangdong on Saturday afternoon local.

Although the strength of the storm is now downgraded, some areas could see up to 24 inches (600mm), of rain.

Gao Shuanzhu, chief forecaster at the NMC, stated that “the monsoon water vapour is expected to lead to heavy downpours and large cumulative rains of extreme nature.”

Hong Kong authorities issued a typhoon alert on Thursday just as Chinese President Xi Jinping arrived to the city in commemoration of the 25th anniversary its handover from Britain and China.

As part of celebrations marking the 25th anniversary Hong Kong’s handover of Chinese rule to Hong Kong, the Palace Museum will be open on Saturday.

After landslide in India, at least 14 people were killed and 30 others are missing

These treacherous conditions forced many businesses to close, which in turn caused problems for public transport networks.

Through August, extreme weather and unusually high flooding were forecasted in China. Climate change is partly to blame.