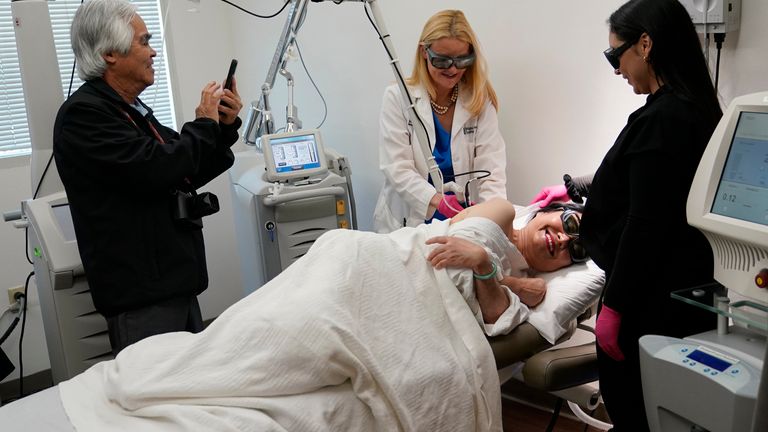 The woman whose photograph of her burnt and screaming in pain became the image of the Vietnam War has had her final skin treatment, 50 years after an American bombing raid changed her life forever.

In 1972, a photojournalist captured the moment the then nine-year-old Kim Phuc Phan Thi was seen running down a road, with her body scalded, her clothes torched from her body, following a napalm strike.

It also earned her the nickname “Napalm Girl” and now 59, Ms Phan Thi has received her final skin treatment after decades of pain from the intense scarring on her torso.

Her wounds were so severe that immediately following the attack doctors thought she would not survive, but after more than a year of treatment, her condition stabilised.

She eventually recovered from her injuries and lived in Vietnam until 1992 before moving to Canada with her husband, where she still lives.

However, she continued to suffer from pain and began specialised treatments with Dr Jill Zwaibel in Miami several years ago, work which the surgeon agreed to perform free of charge.

“Now 50 years later, I am no longer a victim of war, I am not the Napalm girl, now I am a friend, am a helper, I’m a grandmother and now I am a survivor calling out for peace,” Phan Thi told CBS recently, as she marked 50 years since the day she was injured.

‘I look up I saw the airplane and four bombs’

In the interview with the US network, Ms Phan Thi recalled that she was playing with other children when Vietnamese soldiers told her to run.

“And I look up I saw the airplane and four bombs landing like that,” she said.

“Too hot! Too hot!” she screamed while running away from her burning village.

“I still remember what I thought that moment – ‘Oh my goodness, I got burned, then I will be ugly, then people will see me a different way.”

Mr Ut’s image was featured on the front page of The New York Times the following day and he still keeps in touch with Ms Phan Thi.

The 71-year-old has retired but joined her in Miami this week to mark the 50th anniversary and the end of her treatment.

“Even the doctor said she will die, no way she still alive,” he told CBS.

“I tell them three-time and they said no, then I hold my media pass and I said: ‘If she dies, my picture on every front page on every newspaper.’ And they worry when I say that and took her right away inside.”