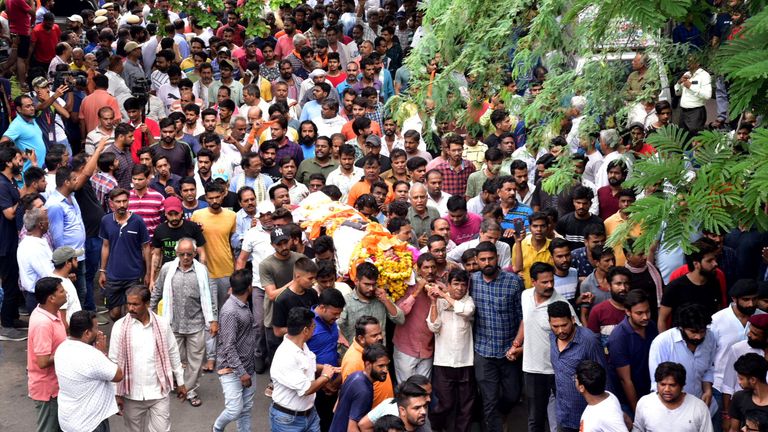 Two Muslim men uploaded a video in which they claimed responsibility for the murder of a Hindu tailor. Police banned public gatherings and suspended internet service in Rajasthan, India.

Tensions are high in Udaipur, a northwestern city. Police arrested the men on Tuesday for allegedly cutting the throat of the tailor in his shop.

Two bearded men brandishing a meat knife, claimed that they were responsible for the killing.

They claimed they were seeking revenge for an insult made to Prophet Mohammad by the victim.

They also mentioned Nupur Sharma (an ex-spokeswoman of the Hindu nationalist Bharatiya Janata Party, BJP), whose comments about the Prophet earlier in the month sparked international and domestic outrage.

Authorities suspended internet access in the city and the surrounding Rajasthan state to stop the video being shared. They also deployed additional police to Udaipur to ban large gatherings and prevent religious unrest from growing.

Several dozen New Delhi residents who were associated with right-wing groups protested the killing and demanded that the perpetrators be executed.

Federal investigators interrogated the suspects Wednesday while police were guarded against unrest in state.

Hawa Singh Ghumaria (a senior officer in Rajasthani police) stated that “we are under strict orders not to permit any form of protests, demonstrations, or plans to condemn the crime.”

He said that the crime sent shockwaves through the country.

According to local media, the tailor was identified as Kanhaiya, 48, who shared a post on social media supporting one of the spokespeople suspended for making the Prophet Mohammad comments.

The attack footage shows the tailor measuring one of the attackers, while the other filming.

After being measured, the man begins to stab Mr Lal with an object. The tailor desperately tries to stop him with his hands.

Bhawarlal Thada, a Udaipur city administrator, stated that the tailor was detained for a support post on social media which was linked to his mobile phone.

He was then released and reported to police that he was being threatened on the 15th of June.

In the aftermath of the murder, the suspects uploaded a second video and accused Mr Lal of blasphemy. They also threatened to kill Prime Minister NarendraModi the same way.

As they smiled, they wrested long blood-covered knives while sat on a couch.

A spokesperson for Pakistan’s foreign ministry refuted reports in Indian media linking the suspects with a Pakistan-based organization.

After the cremation of his father’s body, Yash, the son of the victim, said that terrorists had executed my father in the most horrific way. The country should stand by our family and demand justice.

He stated that the guilty should be tried and sentenced death and denied that his father made any comments that could be considered offensive to other religions.

Political leaders and prominent Islamic preachers condemned this killing. Maulana Ahmed Sydiqui, a Muslim Clergy based in Udaipur said: “The incident shocked followers of Islam, but the heinous act perpetrated by two men is absolutely non-Islamic.”

This incident comes after a series of attacks by Hindu nationalists against minority groups, especially Muslims. These have been targeted for everything, from their food and clothing to interfaith marriages.

In some Indian states, bulldozers were also used to destroy Muslim homes. This is part of what critics call “bulldozer justice,” a trend against minorities.