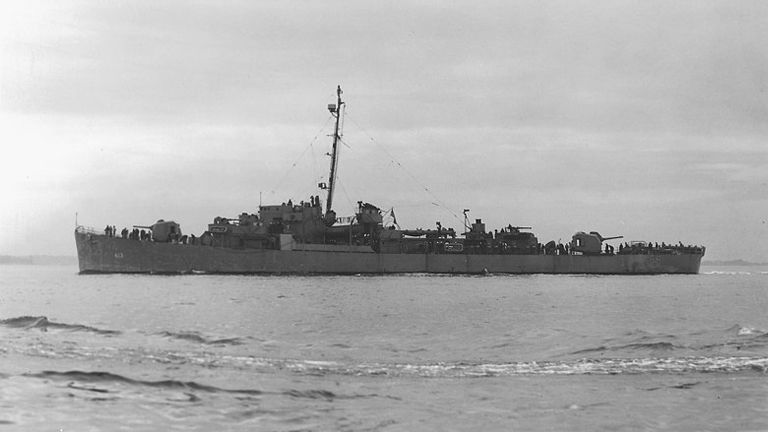 The deepest shipwreck found by explorers has been discovered by US destroyer, which sank in the biggest sea battle of Second World War.

The USS Samuel B Roberts was discovered, split into two pieces, at a depth 22,916ft (6.985m) from the Philippine island Samar.

It was located at 1,400ft (426m) below the USS Johnson, which was the deepest wreck found last year.

Victor Vescovo (US explorer), founder of Caladan Oceanic Expeditions in Dallas, discovered both. He shared the news with EYOS Expeditions, a UK-based specialist in marine travel.

Former US Navy commander, Mr Vescovo said that it was an extraordinary honor to locate the ship. He also hopes to tell the story of heroism, duty, and sacrifice to all who aren’t familiar with the ship and her crew.

The battle that saw the sinking of the Samuel B Roberts resulted in the loss of two escort carriers and two destroyers by the US. Over a thousand Americans were also killed.

The Americans did sink several Japanese ships, causing so much confusion that Admiral Kurita, the Japanese naval leader, decided to withdraw and return to Japan. His ships remained in port throughout the war, but ceased to be an effective naval force.

The Battle of Leyte Gulf was the time when the Japanese began to be known for their kamikaze attacks, in which pilots deliberately flew their planes into US warships.

Yamato struck the “Sammy B”, and it sank. Out of its 224-member crew, 89 were killed and 120 were saved. This included the captain, Lt. Cmdr Robert W Copeland.

EYOS and Caladan both stated that historical records of the exact location of the wreck were inaccurate up to the discovery.

It required the use of the most powerful side-scan sonar available to search for it. This was well beyond the limits of 6,000m (19,685 feet), for which it is commercially highly recommended.

During the battle, the USS Johnson was also lost.