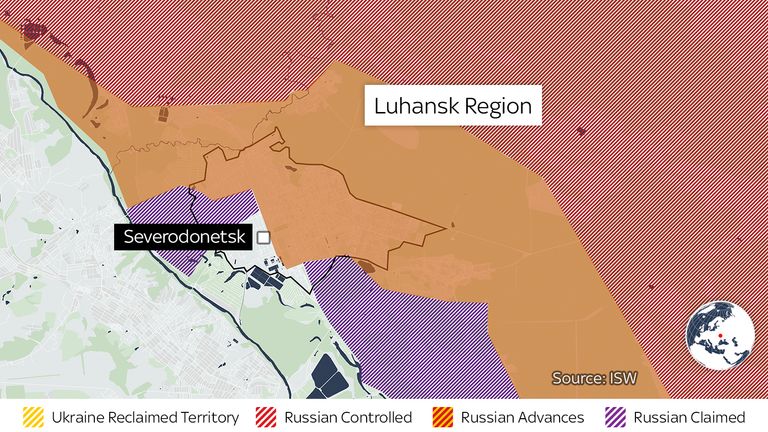 After a long battle, the Ukrainian city of Severodonetsk has been under “full occupation” by Russian forces.

On national television, Mayor Oleksand Stryuk stated that “the city is now fully under the occupation of Russia.” They are trying establish their own order. As far as I know, they have appointed a commandant.

Russia’s Interfax news agency also reported that the defense ministry had stated that the Luhansk city was now under the full control of Russian forces.

Severodonetsk was home to over 100,000 people before it was destroyed by concentrated Russian shelling.

According to Ukrainian officials, the plan was not to stop Russia’s advance but to fight a war against attrition that leaves Vladimir Putin’s forces open to counter-offensives.

After withdrawing from Severodonestk the Ukrainian forces will look to build another defense at Lysyschansk across the Siverskyi Donets.

It was announced that several Russian generals were removed from their commands as a result the Ukraine war progresses, UK Defence Intelligence said.

These include the commander of Airborne Forces General Colonel Andrei Serdyukov and the commander Southern Group of Forces Gen. of the Army Alexandr Dvornikov. This is according to the intelligence branch of the Ministry of Defence.

On Friday, it was revealed that the Ukrainian forces were ordered to leave Severodonetsk following weeks of street fighting. This was done to reduce casualties and allow for regroupment.

This is the largest strategic loss for Ukraine after the withdrawal from Mariupol. Russia will likely view it as a significant victory.

According to Ukrainian officials, troops in Severodonetsk were told to leave because there was not much left in the bombed-out eastern cities to defend.

Serhiy Gaidai, the regional governor of Luhansk, stated on Ukrainian television that “Remaining at positions that have been smashed to pieces for many months just because you can” does not make sense.

It is unknown what will happen to hundreds of civilians who were trapped in a chemical facility.

According to an advisor to the Ukrainian President Volodymyr Zilenskyy, Ukrainian soldiers were forced south of Lysychansk to flee the towns of Hirske, Zolote, and Hirske in the face overwhelming Russian forces.

The foreign minister of Ukraine said that the country’s retreat does not signify it is losing the war. He pointed out that Russia wanted to occupy eastern Donbas by 9 May.

Severodonetsk, Lysychansk, and the surrounding areas are the last pockets of Ukrainian resistance within the Luhansk Region – 95% is currently under Russian and local separatist forces.


UK PM warns against pressure for a peace deal

Boris Johnson , the UK’s Prime Minister, stated that he fears Ukraine might be forced to sign a peace agreement with Russia because of the economic costs of war in Europe.

He said that too many countries believe this is an unnecessary European war… so there will be more pressure to coerce the Ukrainians into a bad peace.

Johnson is currently in Kigali, Rwandan capital, for a Commonwealth summit. He said that Russian President Vladimir Putin gaining his way in Ukraine could have serious consequences for international security and lead to “a long-term economic catastrophe”.

He expressed his support for Ukraine and told the BBC that if the British government decided to “abandon the Ukrainian cause… because it was simply becoming too difficult…the cost…was too high in terms of inflation…economic damage” , he would resign since he would have admitted that he had “lost an extremely important argument”.

According to UK Defence Intelligence, Gen Dvornikov was probably acting for a while as the over-all operational commander in Ukraine.

According to UK intelligence officials the pair are the latest to lose their positions due to the war. Lieutenant General Serhiy Kishel, who commanded Russia’s elite 1st Guards Tank Army was also reported to have been suspended for failing to capture Kharkiv. Vice Admiral Igor Osipov who commanded Russia’s Black Sea Fleet, is believed to have been fired in April for the sinking the cruiser Moskva.


Ukraine is a success story in Kherson,

The command of the Southern Group of Forces will likely be transferred to Colonel-General Sergei Surovkin. This is because the SGF continues to play a key role in Russia’s offensive against the Donbass, UK Defence Intelligence said.

Over 30 years of Col. Gen Surovikin’s career has been plagued by allegations of corruption, brutality and other crimes.

According to the general staff of Ukraine, its troops achieved some success in the Kherson area, pushing back Russians from defensive positions close to Olhine. This was a result of a series counter-assaults by Ukrainian forces.

Four people were injured in a Russian attack on Yavoriv, a western Ukrainian military base, according to the governor of Lviv.

Maxim Kozitsky stated this in a Saturday video.

Six missiles were launched from the Black Sea by Mr Kozitsky, four of which hit their target while two others were intercepted.

Before striking the facility, it was destroyed.

Friday’s address by President Zelenskyy to a crowd at Glastonbury via a videolink was: “We in Ukraine want to live the same life and enjoy freedom and this beautiful summer. But we can’t do that because Russia has taken our peace.”