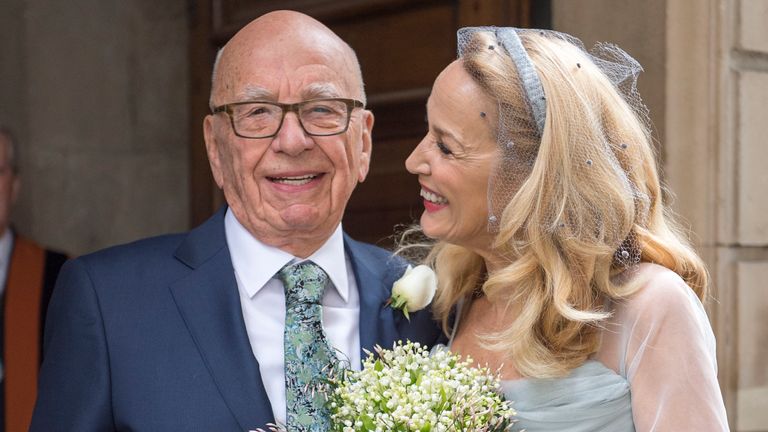 Rupert Murdoch and Jerry Hall are divorcing after six years of marriage, according to reports.

The media mogul and the former supermodel tied the knot in March 2016 in a private ceremony at a church on London’s Fleet Street.

The New York Times first reported the couple were getting divorced, saying it had spoken to two people with knowledge of the decision.

They would only speak anonymously to discuss a personal matter, the newspaper reported.

A spokesman for Mr Murdoch declined to comment to the New York Times, while it said representatives for Ms Hall could not immediately be reached.

It is Mr Murdoch’s fourth divorce.

The 91-year-old was previously married to entrepreneur Wendi Deng, whom he divorced in 2014 after 14 years of marriage. They have two daughters together.

He split from his second wife Anna Murdoch Mann, a Scottish journalist with whom he had three children, in 1999.

Mr Murdoch and his first wife, Patricia Booker, a former flight attendant with whom he had a daughter, divorced in 1966.

Ms Hall, 65, was married officially for the first time to Mr Murdoch.

During the course of her previous 22-year relationship with Rolling Stones frontman Sir Mick Jagger, the couple were wed in Bali, but the 1990 ceremony was not legally binding. They have four children together.