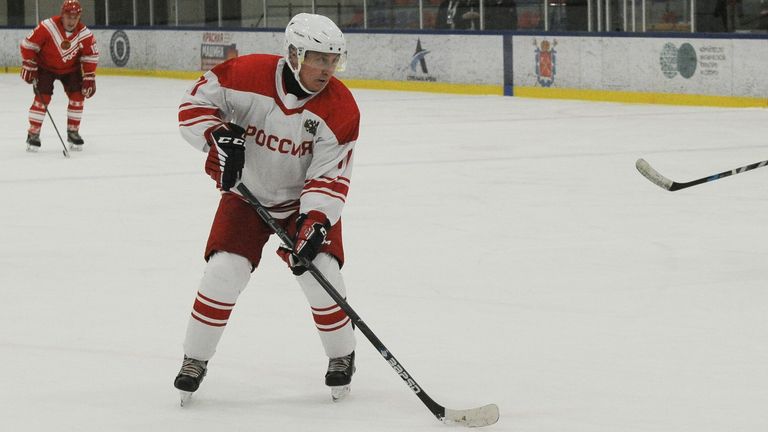 According to the Kremlin, Vladimir Putin was playing hockey at the weekend. This dismisses rumors that the Russian president might be suffering from a secret illness.

Since the invasion of Ukraine, not a single day has gone by without new speculations about the Russian leader’s health and well-being.

Many observers have speculated as to how the Russian leader looks during meetings. This includes whether he is shaking, limping, or gripping the table in pain. Or if he has a puffy, swollen face that could be evidence of steroids use or botox, since he is known for being.

According to Mr Peskov, the rumors about the president’s health have been dismissed as absurd and he has repeatedly denied that he is terminally ill.

Keir Simmons, NBC News’ senior international correspondent, pressed Mr Putin to end the rumors once and for all. His spokesperson also referred to President Putin’s long speech at the St Petersburg International Economic Forum last Wednesday to dispel widespread speculation regarding his health.

He stated that Mr Putin spoke for about three-and-a half hours before he took part in a panel discussion.

He said, “Just think, what if an unhealthy person can perform like this?”

The war is now in its 17th week. Russian attacks have largely focused on eastern Ukraine, with the declared goal of “liberating” Donetsk and Luhansk regions that together make up the Donbas.

Russian-backed separatists hold a portion of the region, and the Russian president wants them all in pro-Russian hands.

Severodonetsk would be Moscow’s largest victory in the invasion.

Serhiy Hayday, Luhansk governor, gave an update from a region of resistance that has held back a wider Russian offensive in Donbas. He said Russian forces had taken control of most of Severodonetsk. This was aside from the Azot chemical facility, where more 500 civilians, including 38 children have been sheltering since weeks.

He added that the road linking Severodonetsk with Lysychansk to Bakhmut was constantly under shell fire.

Rodion Miroshnik is an official of the Luhansk People’s Republic’s separatist administration. He stated on Telegram that “The hours ahead should bring about significant changes in the balance of forces within the region.”

According to British intelligence, the Ukrainian forces are waging war on Russia in Black Sea.

According to the UK Ministry of Defence, President Putin’s navy was “largely neutralized” by Ukrainian coast defenses. This is because it has the ability to control large swathes of the Black Sea.

It stated in its most recent Twitter update that “Ukrainian forces claimed the first successful use of Western-donated Harpoon Anti-ship Missiles to Engage Russian Marine Forces.”

“The Russian naval tug Spasatel Vasily Bekh was the target of the attack, as it was transporting weapons and personnel to Snake Island in north-western Black Sea.

“Russia’s destruction of a Russian vessel during a resupply mission shows the difficulties Russia has when trying to support their forces on Snake Island.

“This is the latest of a number of Russian vessels to be damaged by or destroyed during the conflict with Ukraine.

The United States and its European allies provided financial and weapons assistance to Ukraine, but did not directly participate in the conflict.