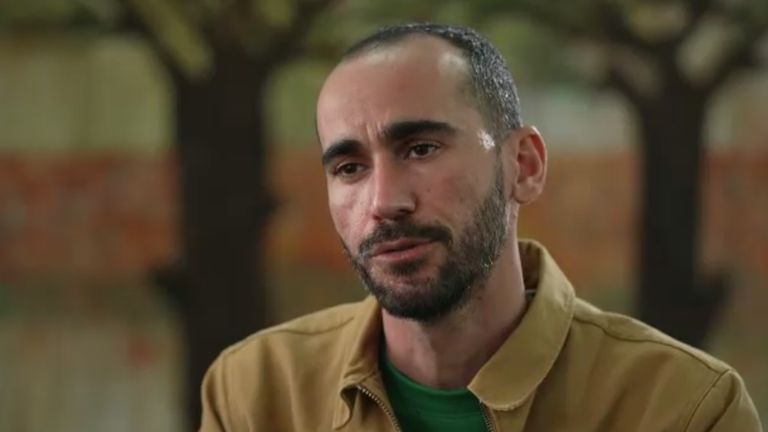 An artist who spent eight years in Australian immigration detention says the country’s offshore asylum system is designed to “dehumanise” people – as the UK’s scheme to send Channel arrivals to Rwanda faces criticism.

Kurdish refugee Mostafa Azimitabar was held in the Australian government’s controversial camp on Manus Island in Papua New Guinea, which has since been closed after it was ruled to be unconstitutional.

“We were controlled by the government and they had a system in order to dehumanise us in order to reduce us as numbers,” he said.

Mostafa is now free and lives as an artist in Sydney, renewing his visa every six months.

In May, Mostafa, known as Moz Azimi, was named a finalist in the nation’s most prestigious portrait prize, the Archibald competition.

It’s an extraordinary achievement for a man who has lived precariously for years.

But it doesn’t change the fact that the government’s ethos, first iterated by former Australian prime minister John Howard in 2001, is: “We will decide who comes to this country and the circumstances in which they come.”

Australia’s offshore processing of asylum seekers has been condemned by refugee advocates, human rights groups and the United Nations.

The government resumed the programme in 2012. In total it sent more than 4,000 people to both Manus Island in Papua New Guinea and the Pacific island of Nauru, including women and children.

The Nauru centre is technically still open but refugees who were there have either been resettled in another country or now live among the Nauru community.

The government says the camp will remain open “indefinitely” to be used if large numbers of people start arriving in Australian waters by boat again.

How do the UK and Australian systems compare?

The Australian offshore system and the UK’s Rwanda scheme share some similarities in their approach and effect, though there are differences.

The Australian home office says that anyone arriving “illegally” by boat will not be settled in Australia.

They add: “Anyone who attempts an unauthorised boat voyage to Australia will be turned back to their point of departure, returned to their home country or transferred to another country.”

Under Home Secretary Priti Patel‘s plans to send illegal Channel arrivals to Rwanda, people deemed to have entered the UK “unlawfully” are liable to be sent to Rwanda where their asylum claim will be processed.

If their claim is successful they would be offered long-term accommodation in Rwanda – not the UK.

‘There was a huge amount of self-harm and suicide attempts’

Dr Nick Martin worked in the Nauru camp in 2016 and 2017 but left when he could no longer accept the “crude” conditions there and felt complicit in the system. He’s now a local doctor in Australia.

“People were living in portacabins and some were in big tents in the camp, often without water and intermittent electricity,” he explained.

“I saw people suffering from psychosis, huge levels of depression and anxiety. People went into withdrawal syndrome where they would shut off from the world,” he said.

“There was a huge amount of self-harm and suicide attempts. It was atrocious.”

In a statement to Sky News, the Department of Home Affairs said: “Regional processing… is integral in reinforcing Australia’s policy that people who seek to enter Australia by boat without a visa will not settle here.”

“Well we realised we had to find a way of telling the people smugglers that under no circumstance would they succeed in delivering people illegally to Australia.”

“We had to stop them landing people in Australia and the offshore processing was one way and occasionally there were boat turn backs.”

Mr Downer says unless countries like the UK and Australia take action thousands of refugees will turn into hundreds of thousands.

He says Australia has been advising the UK on its legal and logistical challenges with offshore processing.

“The policies are close to identical except we sent the people to Nauru which is a small island in the Pacific whereas the UK is sending them to a reasonably large country in the form of Rwanda,” Mr Downer says.

“There are more options for people in Rwanda than there are in Nauru.”