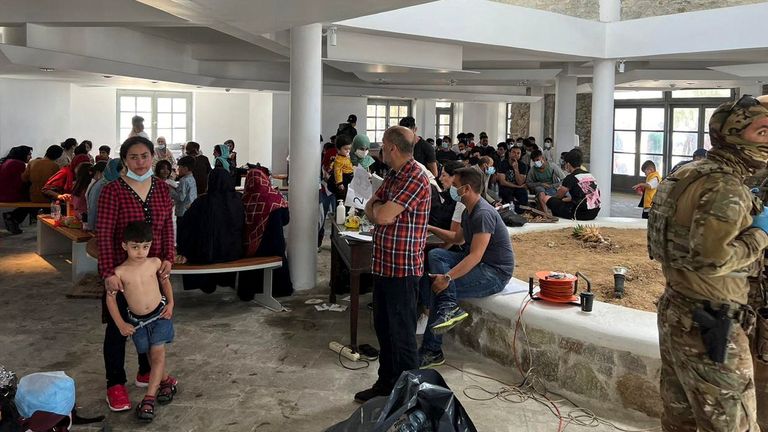 According to Greek authorities, 108 migrants were rescued from a boat found in distress and leaking water in the Aegean Sea under gale force winds.

The rescue migrants consisted of 63 men and 24 women, along with 21 children. They told authorities that four more people were missing.

Late Saturday night, reports came in that a sailing boat was stranded off Delos Island in Greece.

In response, it dispatched three rescue boats and a tugboat.

Authorities said that rescuers were able to bring the boat to an island off Mykonos on Sunday morning.

They were then safely taken to Mykonos.

Authorities were told that the boat had traveled from Turkey to an unknown destination.

“Once more, the coastguard saved lives which the ruthless trafficking network have exposed to mortal risk without even the most basic protection measures,” Ioannis Plakiotakis, shipping and island policy minister, said.

Police in North Macedonia said that they had arrested three people suspected of human trafficking and discovered 71 migrants on Saturday night.

A raid by police on a Kumanovo home revealed 44 Pakistanis and one Indian.

The 41-year old homeowner was also taken into custody. His initials were UF.

It is believed that the migrants arrived illegally in Greece from where they waited to be smuggled into Serbia to travel to other unidentified EU countries.

According to authorities, they were transferred to a migrant reception center near the Serbian border in preparation for deportation.

Separately, 26 migrants from Syria were found in a van by Greek police during routine checks at a southern motorway toll station.

Officials said that the van driver and his assistant were both Macedonian nationals and were taken into custody.

In the meantime, they were taken to a reception center near the Greek border.

Police claim that the Balkan route used by migrants to cross North Macedonia has been more active in recent months, after countries have lifted travel restrictions due to the COVID-19 pandemic.

It occurs after at most 444 people crossed Channel on Tuesday. This is the highest daily number since the government declared it would send some refugees to Rwanda.

As the government tried last-minute legal challenges, hundreds of people crossed dangerously from France to stop the first flight leaving on Tuesday.

These figures reveal that this is twice the number of people who arrived in Britain last year at the same time.