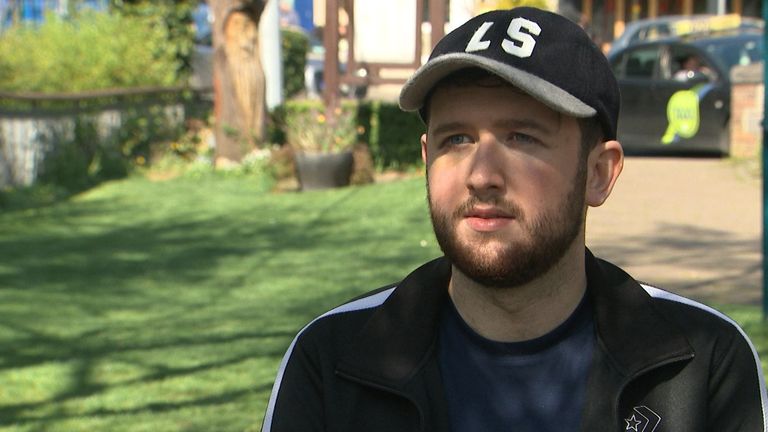 Evan Somers claims he has been subject to verbal abuse because of his sexual orientation.

He is a young gay man who lives in Dublin and would not let that stop him from enjoying Dublin’s vibrant nightlife.

However, he was subject to a brutal physical attack in the early hours of Saturday morning. He is still struggling to recover.

The 23-year old had just left The George, a famous gay bar on Dublin’s Dame Street. He was searching for a taxi and was interrupted by a man shouting homophobic slurs.

Evan said that a young man approached him and began to hurl abuse at me, calling me “this and that” and told Sky News.

He called me a *****, and then he started calling me a *****, while he was punching my face. I was knocked out by him as he hit me and punched me. This is what caused my injuries.

Evan was taken to the hospital where he discovered that he had suffered a fractured eye socket and dislocation as well as two fractures in his ankle.

He said that the bones in his ankle had been broken and that surgeons had to work hard to fix them.

Evan said that he is still trying to reconcile with the attack. He is a rugby player for the Emerald Warriors, an all-inclusive rugby team. His leg injuries have made it difficult to know if he will be able to play again.

The attack has not led to anyone being arrested. Even if they did find the perpetrator, the Gardai [Irish Police] would not be able to charge him with hate crimes because, unlike other European countries, Ireland does have a specific hate crime statute.

Evan stated, “I find it disgraceful.” “Not only for me, but for all victims of hate-related attacks. This bill, I believe this legislation should be prioritized.

He is referring to Hate Crime Bill which, despite attempts to instill a sense of urgency, has not yet made it to the Irish parliament.

Two men were killed in Sligo just days after Evan was attacked. Gardai investigating Michael Snee’s and Aidan Moffitt’s deaths suspected that they were motivated by hate crimes.

Helen McEntee, the justice minister, said that she was aware that it had been a “difficult week” for LGBT communities. She said that she wanted to “reassure people, that hate crimes motivated by prejudice or hate will not be tolerated and will result in higher sentences. I am hoping to introduce the hate crime legislation within a few weeks.”

The bill has not appeared for two months. Sky News was told by a spokesperson that the bill will create aggravated versions of existing offenses and carry an “enhanced penalty” and “strengthen law”. They were able to tell Sky News that the minister would publish the legislation “as quickly as possible”.

“Months back, Helen McEntee spoke of introducing legislation in a matter of weeks. “As soon as possible” sounds like it’s been put on the political agenda. The minister and her officials should do better.

As Mr O’Reilly met with police at Store Street Station in the inner-city, we met him. Many in the gay community are nervous about the parade of Dublin Pride on 25 June, due to the series of attacks.

“I assumed the CEO role at Outhouse nine weeks ago and have heard about six instances of violent assault against someone within the community.” Mr O’Reilly shared with us. “I cannot remember a time when it was so common, and I have worked in the LGBT community all my adult life.”


Racism is also an issue

Not only gay men need to take action, but all members of the LGBT community. Sharans Kabra, a native Indian, has lived in Dublin’s Lucan suburb for four years with his wife.

He’s been subject to three instances of serious racist abuse over the years, including being thrown stones at him, called Ali Baba, and being told “to return home”.

Mr Kabra stated, “My message to minister would be: Make this inclusive society for everyone.” “A hate crime legislation is a necessity in every country right now, even Ireland. This is the place I would love to call home.”

The government has promised that legislation with greater potential to deter crime is in the works.

For now, those who most need it the most wait for Ireland’s long-promised hate crimes law.