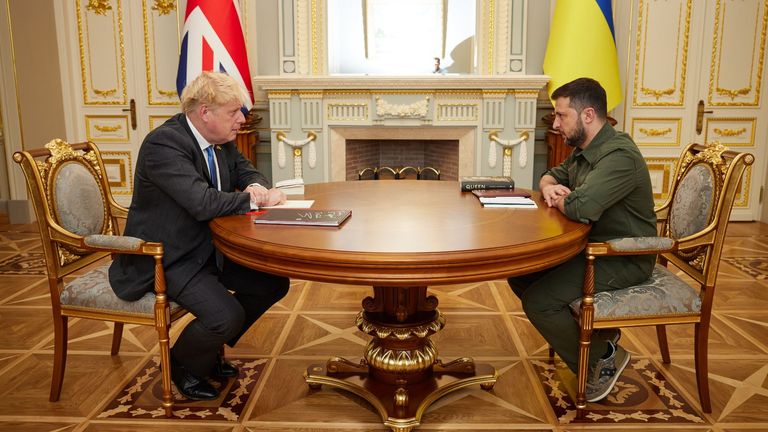 “Conspiracy b s” dismissed claims that Boris Johnson skipped a conference of Northern MPs to travel to Ukraine because of fears of bad reception following partygate.

Unexpectedly the prime minister pulled out of a conference for northern Conservatives in Doncaster Friday, days before a critical by-election held in Wakefield which the Conservatives are widely predicted to lose.

Instead , he travelled to Kyiv in order to meet with Ukrainian president Volodymyr Zelenskyy.

Sky News deputy political editor Sam Coates stated that the organizers of the inaugural Northern Research Group conference (NRG), were “mystified” by the non-show but were told that there was a good reason and that the event was of “sufficient importance”.

It was speculated that Johnson might have cancelled to avoid a rough ride after the partygate scandal, and a major revolt of his own MPs.

The claims were dismissed by Mr Johnson’s allies, and Defence Secretary Ben Wallace described them as “conspiracy s”.

He stated that there was “a lot rubbish being spouted”. He added that such visits must be organized in “total secrecy”, and it was important for Mr Johnson support for an ally during war.

Helping Ukrainewin is linked to trying to help at-home. He tweeted that part of the inflation we see is due to gas and food prices, which are partly driven up by this conflict.”

“It’s amazing how important trips can create so much conspiracy b s.”

PM arrives in Kyiv to surprise

Sky News has learned that one Conservative MP was furious that the prime minister didn’t turn up at the conference, and that they were told by Johnson that Johnson “was on the train from Doncaster” Friday morning.

The MP stated that this was his first attempt to reach out to colleagues, and that he had failed it.

Jake Berry, the leader of NRG, stated that people were “disappointed” by Johnson’s non-show.

He stated that the summit highlighted the importance of giving the region more control, so it wasn’t dependent on Whitehall politicians.

He stated that the Conservatives would be defeated at the next general elections if the North could not see the benefits to levelling up.

Channel 4 News’ Berry stated that the prime minister’s movements are a matter for Downing Street.

“Clearly people were disappointed. There were more than 30 colleagues and over 400 members.

“What we have presented today are hugely positive ideas from and for the North that are intended to appeal to voters in Wakefield as well as across the North of England.

“It’s about fuelling the debate about how here, in North England, we can take back our destiny, and not be dependent on a prime minister at Whitehall or Kyiv or anywhere else for a moment to change our lives.

“Regardless of who the prime minister is or what is in the Conservative Party manifesto – unless people feel good in the North, it will be a difficult election. That is something I would not let go of.”

Henri Murison from the Northern Powerhouse Partnership, who was also present at the NRG event, stated that Johnson’s decision to not attend was a missed opportunity.

Downing Street reported that Mr Johnson met President Zelenskyy at Kyiv to discuss Ukraine’s fight against Russia, and to offer a major training program for Ukrainian forces “to sustain their heroic defense”.

According to the government, the program, which is being led by the UK, could train up to 10,000 soldiers per 120 days. It will also help both existing and new Ukrainian soldiers.

This initiative will train and drill Ukraine’s armed forces with battle-proven British Army expertise. It will allow them to accelerate deployment, rebuild their forces, and increase their resistance while they defend their nation’s sovereignty against Russian invaders. Downing Street also added.

When he visited Kyiv in April, Johnson was the first G7 leader to do so.

At the time, the Ukrainian defense ministry stated: “We welcome Boris Johnson in Kyiv… Be courageous, like Boris.” Be brave like Ukraine.

As Ukraine seeks to join the EU, Mr Zelenskyy was present on his latest visit. He met with Olaf Scholz, Germany’s Chancellor and French President Emmanuel Macron.