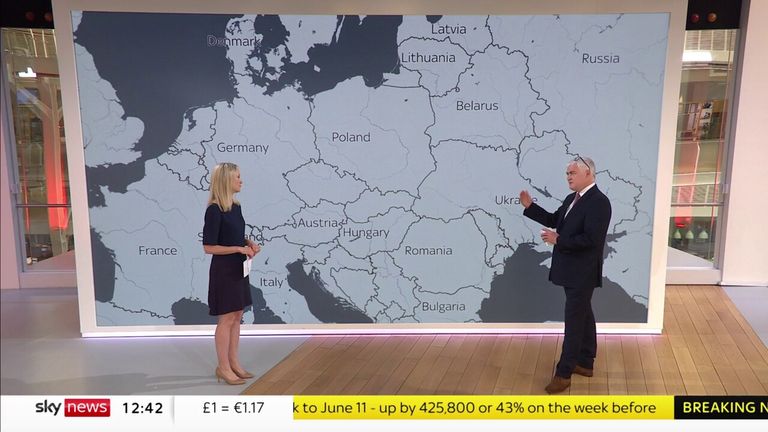 Ukraine could become a member of the European Union after the EU Commission proposed it as a candidate, the first step on a long road toward membership for the war-torn country.

Ukraine applied for membership in the bloc less than a week after Russia first invaded the country.

President Volodymyr Zelenskyy hailed the news from Brussels as a “big step forward”.

On Thursday, the leaders of France, Germany, Italy, and Romania all visited Ukraine and vowed to back Kyiv in becoming an official candidate.

Mr Zelenskyy said Ukraine had “powerful” support from these countries.

“It was important for me to hear another fundamental thing from the leaders – they agree that the end of the war in Ukraine and peace must be determined exactly as Ukraine sees them,” Mr Zelenskyy said.

“As our people see them.”

The move is unlikely to sit well with Russian President Vladimir Putin, who does not want Ukraine to have a strong relationship with the West.

The recommendation will now be discussed by leaders of the 27 EU member states at a summit next week in Brussels. All members must agree to any new country joining, along with the pace of negotiations and the terms on which it joins.

“We want them to live with us, the European dream.”

However, the decision was on the understanding that Ukraine carried out a number of reforms, Von der Leyen added.

Candidate status was also recommended for Moldova, while things remain a little trickier for Georgia, which also applied for membership.

Ms Von der Leyen said although Georgia had a strong application, it had yet to come together politically.

The EU has thrown a huge hug around Ukraine – but really, what else could it do?

There is a long way to go until Ukraine ends up as a member of the European Union, but this is a significant first step along the path.

European Commission President Ursula von der Leyen, dressed in the blue and yellow of the Ukrainian flag, was careful not to strike a triumphalist tone, nor to present this as an act of pity.

Her analysis of Ukraine’s strengths was all to do with the country’s political and economic structures and its ambitions for the future.

So we had talk about the work Ukraine has started, but still needs to fulfil, on enforcing the rule of law, tightening its anti-corruption procedures and limiting the powers of oligarchs.

Ms Von der Leyen’s consideration, though, was that the progress so far had been good, which is why she said Ukraine deserved to be upgraded to an official candidate, along with Moldova.

That doesn’t mean that Ukraine is about to join the ranks of EU member states, because the subsequent path to membership can be a long one. Turkey was actually declared an official candidate at the end of the last century, but has no chance of joining the bloc in the foreseeable future.