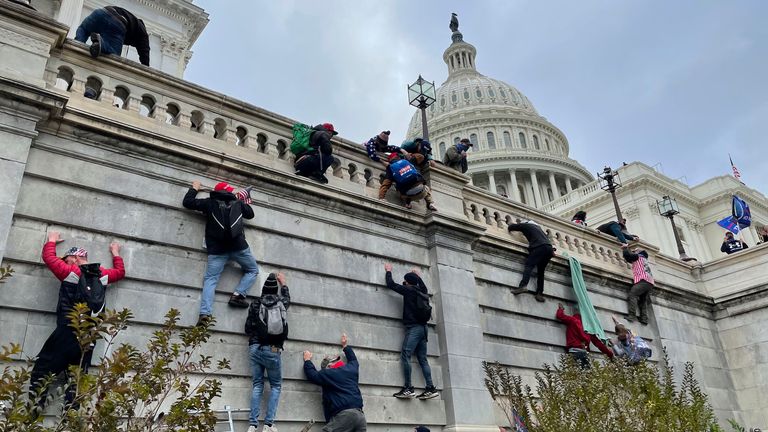 Former President Donald Trump spoke out in a typicalally bombastic speech about the Capitol Riots Hearing. He dismissed it as “crazy” or a “theatrical production partisan political fiction”.

On Friday, Donald Trump spoke at the Faith and Freedom Coalition Conference in Nashville. He described five deaths in the riots of 6 January2021 as “a simple protest that got out of control”.

He also dismissed the congressional investigation into the incident as “wasting everyone’s time”.

Inspired by an incendiary speech Trump had just delivered near the White House, in which he claimed he was denied a second term because of voter fraud, thousands marched to the Capitol Building that houses the US government seat.

The Capitol was in session that day, supervising the congressional certification for Joe Biden’s win in the presidential election.

The large group broke through the barriers at the pedestrian entrances to Capitol building’s grounds. After a mob broke into windows and forced doors open, several people also entered Capitol Building.

In the chaos, more than 100 police officers sustained injuries.

An investigation by the House panel into the events of that day is underway.

Trump said to his supporters in Tennessee, “Let’s not be misled. This isn’t a congressional investigation. It’s an awful situation that wastes everyone’s time.

“This is a theatrical production that combines partisan political fiction and it’s getting terrible ratings. They’re going mad. They are going insane.

“The committee is taking testimony from witnesses who defended my for eight hours, cutting it up and truncating soundsbites to make their statements sound absolutely terrible.”

He continued: “Remember that it’s also about (about) those people who weren’t allowed even to testify that they wanted to. Many people wanted to testify about what was seen and how corrupt it was.

“Meanwhile the committee refuses any tape of people saying good things, things we want to hear. It’s not a two-way street. It is a rigged deal. It is a disgrace.”

In response to allegations that he had called Mike Pence, his vice president, a “wimp” because he didn’t follow his wishes and stopped the rubber-stamping for Mr Biden’s victory, Mr Trump said: “I never called Mike Pence an idiot. He was not a wimp.

Former president was harshly critical of fellow Republican Adam Kinzinger who said Trump had “lit the flames” for the insurrection.

During his opening remarks at the hearing, the congressman was emotional.

Trump stated: “Adam Kinzinger is the crier. He cries whenever he speaks. He has a mental disorder. This guy starts crying every time he gets up to speak. “There’s something wrong.”

According to reports, he is considering whether or not he will formally launch a third presidential campaign.