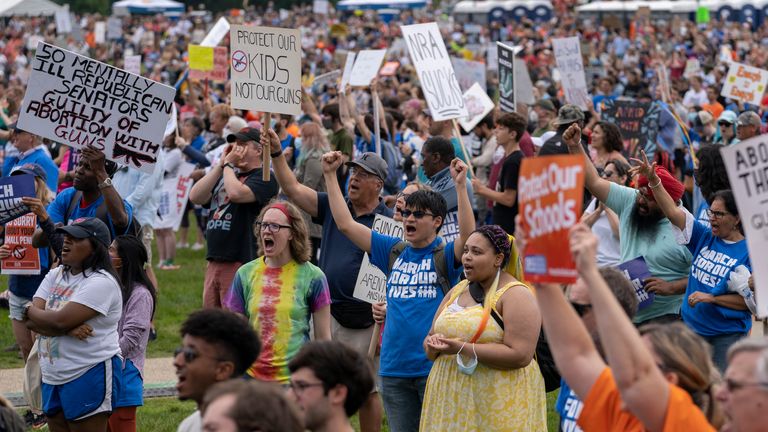 A potential breakthrough that could lead to the first significant new US gun law in decades has been announced by a bipartisan group of senators.

The framework for a firearms safety bill is a response to last month’s mass shootings but the proposal falls far short of tougher steps long sought by President Joe Biden and many Democrats.

The plan includes support for state “red flag” laws keeping firearms from potentially dangerous people, tougher criminal background checks for gun buyers under the age of 21 and a crackdown on “straw purchases” by people buying weapons for others who could not pass a background check.

President Biden and other Democrats have called for a ban on semi-automatic, assault-style rifles and high-capacity magazines or at least raising the minimum age to buy those from 18 to 21.

The president said in a statement that the framework “does not do everything that I think is needed, but it reflects important steps in the right direction, and would be the most significant gun safety legislation to pass Congress in decades”.

The suspects who killed 10 black people at a grocery store in Buffalo and 19 students and two teachers at an elementary school in Uvalde, Texas, were both 18, and many perpetrators of recent years’ mass shootings have been young.

Democratic Senator Chris Murphy, who led the negotiating effort alongside Republican Senator John Cornyn, said “the heavy lifting is behind us” after three weeks of intensive talks, though a “significant amount of work” remains.

Mr Murphy said he hoped for Senate passage by early August or sooner.

The deal was announced a day after tens of thousands of people rallied in Washington DC and around the US to urge lawmakers to pass legislation to curb gun violence.

While an important breakthrough, the agreement does not ensure that legislation will be approved.

Lawmakers still must hammer out legislative language that can attract enough votes to pass in both the Senate and House of Representatives, each narrowly controlled by Democrats.

Read more:
More than 700 people shot dead in the US since the Texas school shooting

Twenty senators, including 10 Republicans, released a statement calling for passage of the plan.

That is potentially crucial because the biggest obstacle to enacting the measure is probably in the 50-50 Senate, where at least 10 GOP votes will be needed to attain the usual 60-vote threshold for approval.

“Families are scared, and it is our duty to come together and get something done that will help restore their sense of safety and security in their communities,” the politicians said.

What is included in the framework?

• The compromise would make the juvenile records of gun buyers under age 21 available when they undergo background checks
• Money will be offered to states to enact and put in place “red flag” laws that make it easier to temporarily take guns from people considered potentially violent, plus funds to bolster school safety and mental health programmes
• Some people who informally sell guns for profit would be required to obtain federal dealers’ licenses, which means they would have to conduct background checks of buyers
• Convicted domestic abusers who do not live with a former partner, such as estranged ex-boyfriends, would be barred from buying firearms, and it would be a crime for a person to legally purchase a weapon for someone who would not qualify for ownership

The agreement was quickly endorsed by groups that support gun restrictions including Brady, Everytown for Gun Safety and March for Our Lives, which organised the rallies held around the country on Saturday.

The National Rifle Association said in a statement that it opposes gun control and infringing on people’s “fundamental right to protect themselves and their loved ones,” but supports strengthening school security, mental health and law enforcement.

The group has long exerted its sway with millions of firearms-owning voters to derail gun control drives in Congress.