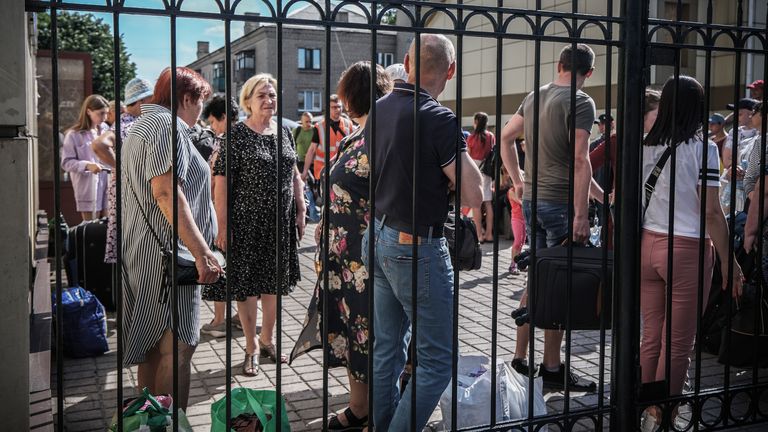 It is scorching hot. As we wait for the station gates opening, we watch as many people line up to get on a train.

Since the beginning of the war in Ukraine, we have witnessed it over and over. It doesn’t get easier.

The Russian army is advancing on Donbas cities, towns, and villages while the Ukrainian army attempts to maintain its lines.

Continue reading: Zelenskyy claims that the fate of Donbas rests on the ‘brutal war’ in Severodonetsk. This is a ‘endless caravan to death’ discovered in Mariupol

Even as war draws near, thousands upon thousands of people remain.

When conditions become too difficult, or their homes become uninhabitable, people will reluctantly leave. They take with them what little they have left from their lives.

They are trying to get on the 16.30 express from Pokrovsk, the Donbas region, and end up at the station.

Many people we meet have waited for months.

They say that they can’t keep going as the street fighting and heavy artillery worsens in Severodonetsk, Lysychansk, and Lysychansk.

Volunteers carefully transport the disabled and infirm to small lifts attached at the sides of train carriages.


Most will never come back

They are carried into the station by waiting staff.

Before moving on to the next patient, the medics make sure they are healthy.

After a lifetime spent in the east, these people are unlikely to return – an experience that is intrinsically connected to Russia. Many of these people speak Russian, and their families are Russian.

Many people used to cross between the two countries before the war.

They are now being forced to start a new life in Ukraine, where the majority of them speak Ukrainian.

It is easy to see that their hearts are broken.

We meet Kateryna Bednenko, 76 years old, in the back of an ambulance that has parked on the platform.

She had a stroke, and is now unable to move.

Lysychansk was a raging battleground and Mykola, her husband, had to wait for rescue.

He says that this is their first time outside since February.

Valentyna Volochkova, 78, was astonished to just get to the train station.

She visited the local market, was criticized, and finally gave up on returning home.

She walked for two and a quarter kilometers and then took the first taxi.

She has no regrets about leaving her life.

“What should I’ve waited for?” My house was completely destroyed and I was trapped inside. So I got up all my strength and went outside to show that I was leaving.” She told me as I sat in the train carriage, waiting for my train to leave.

We meet Liudmyla in a carriage for families and children.

She and her son don’t want to go on this ride. They aren’t ready to leave their home.

“Do I have other options?” What can I do to keep my child here when his classmates have left? She asks.

She feels that she must do this, even if it is not for herself but for her son.

“Tell me, please. What would you do if I were you?” Would you rather stay home? The glass flew out …” and all the windows were broken. She then started crying, almost embarrassed by the sight of her tears.

“We have worked hard for all we have over the past 30 years. We had just finished building the house …”

This war is not slowing down.

And they were those who believed in the safety of the West, and the support promised to them. It’s too late for them.