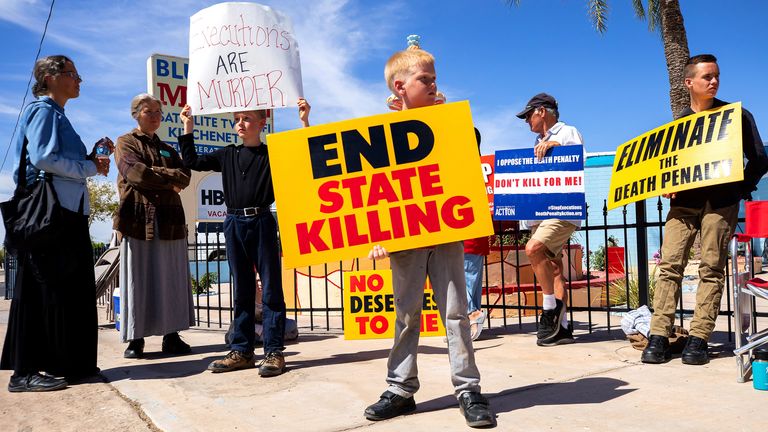 Arizona executed a man convicted in 1984 of the murder of an eight-year old girl.

Frank Atwood, aged 66, was convicted of the murder Vicki Lynne Hoskinson. Vicki’s body was discovered in the desert.

After a last appeal by his lawyers for a stay of execution, Atwood was executed by lethal injection in Florence’s state prison.

Vicki vanished after she dropped a birthday card at a local mailbox and left Tucson. Seven months later, her body was discovered.

Debbie Carlson, the girl’s mother was present at the execution.

She stated that Vicki was a lively little girl with a infectious laugh and a smile to melt your heart.

“Her royal blue eyes were a reflection of an old soul full of wisdom. Her freckled nose was special and we are grateful to have it in our grandchildren.”

“Vicki was a fierce little girl that kept you on your toes. She will always be known as Dennis, the menace, giggling every step of the way.”

1975 conviction of Atwood for lewd, lascivious conduct in California with a child less than 14 years old. Vicki’s murder conviction was pronounced in 1987.

He claimed that Vicky’s murder was not his fault.

Atwood was the second Arizona prisoner executed in less than one month. After a nearly eight-year pause due to difficulties in obtaining lethal injectable drugs, the state resumed execution of the death penalty in May.

Clarence Dixon was another death row inmate executed last month in an execution some experts believe was botched.

Officials took Dixon about 30 minutes to place an IV in his body to deliver the deadly drug, and another 10 minutes for Dixon to die.

Arizona could now begin executions of death row prisoners, according to opponents to the death penalty.