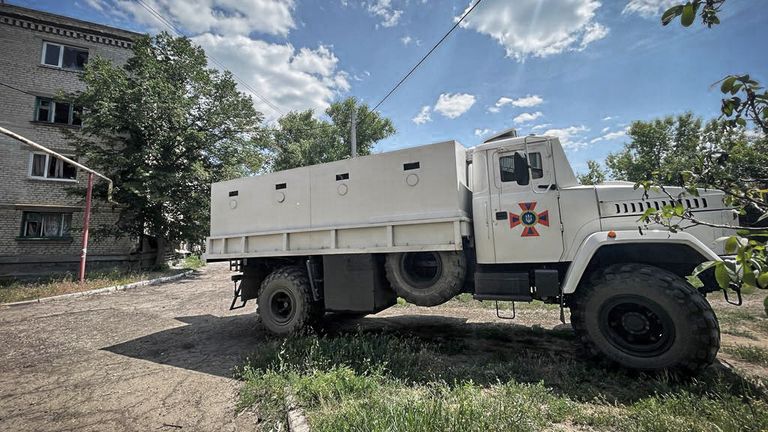 Bakhmut, a frontline Ukrainian city, is punctuated by the constant, sickening sound from incoming and outgoing artillery mortars and rockets.

We climb into an armoured personnel vehicle, which has been painted white by local emergency services.

It’s called the “capsule” and they recently began using it to lead their evacuation efforts in towns and villages located just a few miles away from Russian positions at the frontlines.

Fighting in Lysychansk and Severodonetsk is fierce.

If they fall, and the Russians take south the highway, also known as the “road of life”, then there is no escape for those who are left behind.

The “capsule” heads into the countryside. The Bakhmut District State Emergency Services crew was called to evacuate the people from Soledar, the frontline city.

We travel through heavily-armed Ukrainian defensive posts, with their tanks and artillery hidden behind trees. The countryside is a networked of newly-dug trenches.

According to the rescue team, they cannot know how many people took a place on an evacuation truck.

Since the start of the war, these men have saved thousands.

Major Artur Spitsin who is leading the mission said, “We’ve been informed of three, maybe six today, but sometimes nobody comes to out or they change our minds.”

“There has been some firing this morning. It can distract people from leaving.”

We find it strange that people will not leave their homes as the situation becomes more dangerous.

This is also true in many wars around the globe. They remain despite danger and total lack of electricity or water.

It’s all around the frontline.


“I don’t want impose myself”

The first stop is at an apartment block. Major Spitsin’s team starts banging on doors trying to find people who are asking to leave.

Natalia Babenko, 76 years old, tells them that she is the last person left. She and her dog are her only options.

She explains that she is sick and doesn’t want me to be a burden on anyone and move from one place to the next.

“Are you afraid though?” I ask her.

Although these villages and towns appear abandoned, there are still many people living in them.

Sometimes they don’t arrive to evacuate because of the intensity of fighting nearby. They are too afraid.

Crew members want to search for other crew members, but they see a military post not far away. They tell us that we are in danger and must leave immediately.

They meet to discuss quickly the next destination.

Major Artur Spitsin tells his team, “It’s our only option. We have no other choice.”

“The road where there’s always f ****** photography?” One of them replies.

It was a decision.

We continue on our journey, following the Ukrainian frontlines, to Soledar.

We find a group of people outside cooking. It’s not possible to get water or electricity anymore.

Two women are approached by emergency workers who tell them to evacuate.

One of the women says, “If God wants to me to live or save me, then I’ll be saved.”

After arguing over which one should stay, the women finally agree that they will not.

Crew members try to reason with them.

They waved them goodbye: “Thanks so much, boys!”


“Everything we’ve done is here”

They prefer to live underground in the darkness of basements. There are currently 23 of them.

They keep water in buckets and rely on an old radio that sits on a table to communicate with the outside world.

It is miserable, but it is home.

“We don’t want go because if you leave… well, at least here we have our own houses, apartments, and everything we’ve worked so hard for. “If we leave, then we won’t come back, and in the final, we’ll become destitute,” Nadezhda, 70, tells me, while her mother, 95, watches.

Residents are not having it and won’t leave.

Nadezhda, who is preparing to leave, emerges from her underground shelter.

She is emotional and in tears.


“Your mothers are the exact same as mine”

We leave and she tearsfully hugs us all.

“Boys, please send my condolences for your mothers. Your mothers are just as …”.

The remaining members of the group chose to stay and return to their cooking pots and fire, quietly simmering.

They sit back and watch as the only way out, their ‘capsule,’ disappears in the dust.