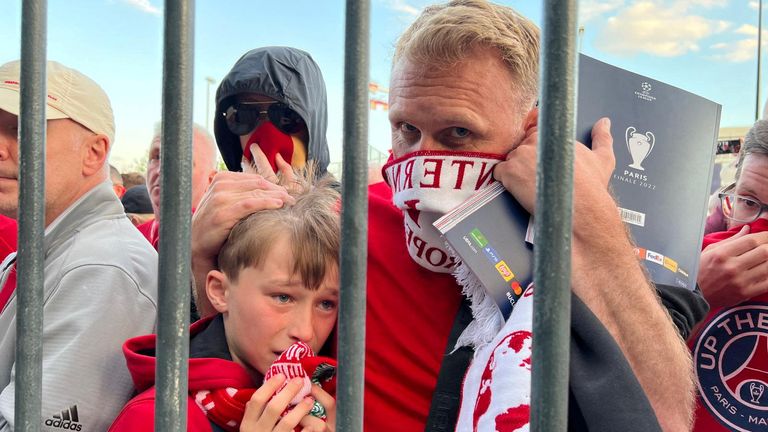 UEFA apologized to its fans for violence that occurred before the Champions League final at Paris’ Stade de France last week.

The governing body of European football said that they shouldn’t have to witness or experience distressing and frightening events in the lead-up to the game.

“No football fan should ever be placed in such a situation again,” UEFA stated.

The chaotic scene outside the stadium was widely condemned in Britain. Real Madrid earlier today called on authorities to explain the reasons supporters were “helpless and defenseless”.

Liverpool lost 1-0 against Real in Saturday’s match. Some Reds fans were tear-gassed and pepper-sprayed as they attempted to enter the stadium.

France’s interior minister claimed that the problems were caused by thousands of Liverpool supporters who purchased fake tickets.

Due to chaos, the kick-off of the most famous club match in the world was delayed.

UEFA has announced an independent review this week and has now published the terms of reference.

It stated that it would “identify the shortcomings and responsibilities for all entities involved with the organisation of final”.

“A complete picture and timeline of the day will be created, including spectator flows to the stadium via various access points.”

The security, mobility, and ticketing plans of the event will all be scrutinized. Also, the preparedness of authorities to host the final, including arrangements for fan meeting points, will be evaluated.

Supporter groups from both football clubs, police, French Football Federation, stadium operators and other authorities will all be consulted.

Merseyside Police officers said that the vast majority of fans waiting in the stadium behaved in an “exemplary”, which did not justify the heavy-handed tactics used by the police.

What happened at the Champions League final?

Liverpool FC, Nadine Dorries, Culture Secretary and Mayor of the City had all requested that UEFA investigate.

Real Madrid said Friday that its fans were also “victims of the unfortunate events” in Paris.

According to the report, many were “violently attacked, harassed, and robbed”, and some even had to spend the night at hospital.

The scenes caused “deep outrage across the globe”, according to the report.

A questionnaire and email address will be provided so that people who are affected can provide feedback to the review.

It will be implemented immediately by Dr Tiago Rodrigues, Portugal’s former education minister.