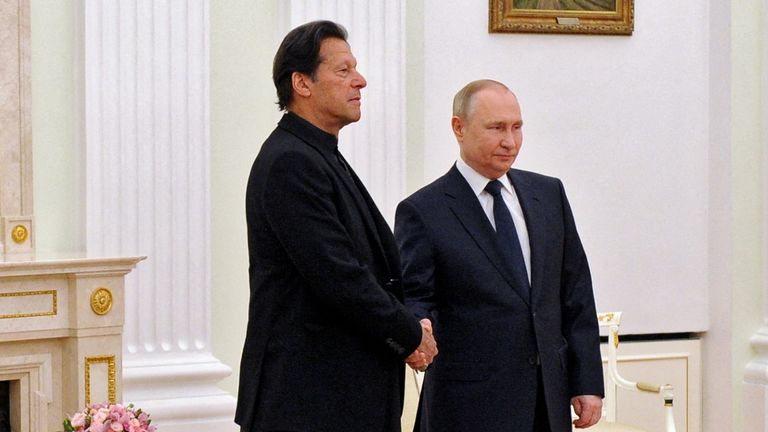 Imran Khan, Pakistan’s former prime Minister, insists he didn’t know that Russia was planning to invade Ukraine the day after he met Vladimir Putin in Moscow.

Sky’s Mark Austin spoke to Khan about his controversial face-to-face meeting with Russia’s President and shaking hands just hours after the conflict in Ukraine started on 24 February.

Peshawar’s Mr Khan said via video link that he arrived in Russia on 23 Feb for a two-day visit.

“I don’t believe in military solutions. Ours was a bilateral encounter, it was planned well before.

We didn’t know that Putin would enter Ukraine when we reached there. What was the point of knowing this information? How can you be punished for it?

He stated that he was against military solutions for Ukraine and that the Kremlin’s visit was intended to facilitate bilateral agreements.

Khan was also asked about the close ties between his government and Russia. He stated that he was elected to serve Pakistanis.

“There are 50,000,000 people in Pakistan who live below the poverty line. I wasn’t elected to fix all the wrongs in the world.

He stated that “my responsibility was to my nation and all my relations, whether they were with China, the United States or Russia, were for our own benefit.”

Tens Of Thousands Protest against the Removal of Ex-PM Khan

“Did anyone oppose it?” Atrocities are being committed in Kashmir. 100,000 Kashmiris have been killed. Is anyone blaming India for this?

“No, India is an ally. Let us be neutral so that we can care for our people.”

Pakistan shares a large border to Afghanistan. Khan was asked about the Taliban takingover of Pakistan last year. Khan stated that there was not going to be any military solution in Afghanistan.

He said that he was not responsible for or a spokesperson for the Taliban and added that Pakistan had never supported the Taliban.

“Pakistan is collateral damage to Afghanistan.”

After losing the confidence vote, Pakistan PM broke his silence

After opposition parties introduced a motion against Khan in April, Khan lost a confidence vote. The motion blasted Khan for not being able to revive the economy or tackle corruption.

He called for a general elections today and stated that the Pakistani people do not want a “foreign-imposed” government in which members of his party are bought.

He stated, “We believe that the people should decide rather than having someone else put a government in place of the country.”