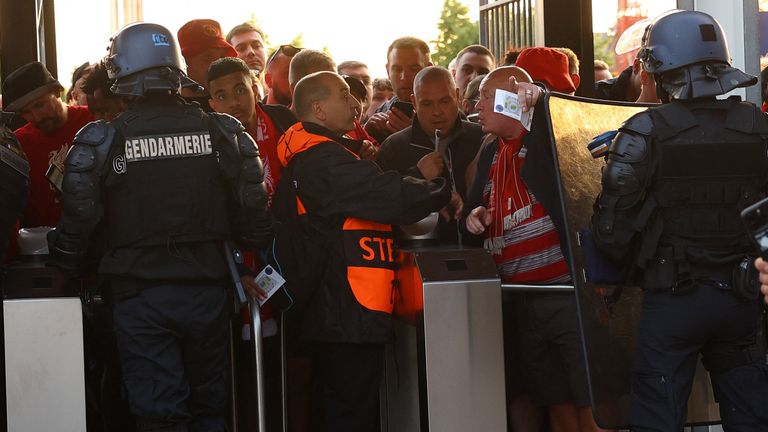 Liverpool FC has requested a formal investigation after violence was committed against its supporters before the Champions League final against Real Madrid, Paris.

The Stade de France security appeared to be overwhelmed by the large crowd . Many supporters waited outside the ground for hours.

Kaveh Solhekol Sky Sports News’ chief journalist was one of those who were tear-gassed at this stadium.

He described the incident shortly afterward: “In the final few minutes, me, three of my colleagues were tear-gassed by the French police for no reason whatsoever.” We managed to get some water from the French police and poured it into our eyes. It was quite a horrible experience. All is well.

“This is quite a bizarre situation. It seems that a lot of people have arrived at the stadium without tickets. These young French citizens seem to be just trying to get through security barriers.

“From what I have seen, even at the Liverpool fan club, the French police has shown a very strict attitude with zero tolerance. They don’t care about how many crushes are developing, and they insist on searching everyone before allowing them to enter.

“We had a situation in the fan park today where some Liverpool fans waited for three hours to be admitted to a free event. They were held up at five, four, and five checkpoints, where they were searched.

“We had the exact same situation at the stadium tonight. There are many police officers, riot police and security personnel here. Their goal is to prevent anyone without a ticket from getting near the stadium.

“The situation is complex because we are not talking about paper tickets. People have passes on their smartphones. They aren’t able to find their passwords or bring up the correct passes. People have been left in shock after their tickets were taken from them. Many people have had their electronic tickets taken from them.

“They don’t care about the security and police here at the Stade de France. If they don’t have tickets, they won’t let anyone near the stadium. As I walk through the streets, I see a lot of young French people trying to gain entry to the security perimeter.

“I cannot speak for the Liverpool fans, but what I have seen isn’t bad. They didn’t show up late, and I was surprised at how many supporters showed up early at the stadium.

“We arrived about four hours before kickoff and expected it to be quiet. It felt like it had been an hour before kickoff, because so many people arrived in good time and early. I was very concerned to read statements by UEFA blaming delays in kick-off and problems at the stadium for late arrivals of fans. From what I’ve seen, this is not true.

“There was some fighting between the Spanish supporters, the riot police and that’s when they pulled out the tear gas. We were in the wrong place at wrong time.

“But I must stress again – I haven’t seen any Liverpool fans causing any trouble or problems whatsoever with my eyes.”