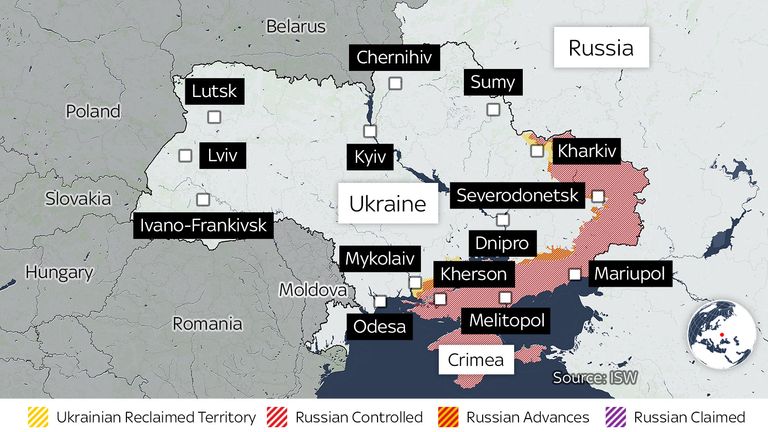 The shelling has increased in Severodonetsk, one of the few areas of the Luhansk Region in Donbas still under Ukrainian government control.

Russian forces are attacking from three directions in an attempt to surround the city and neighboring Lysychansk. They know that if they fall almost all of Luhansk would be under Russian control.

Serhiy Gaidai, Luhansk’s governor, stated that approximately 50 Russian soldiers had reached a key highway and managed to “gain a foothold”, setting up a checkpoint.

“The checkpoint was breached, they were thrown back… The Russian army doesn’t control the route now but they are bombarding it.”

He stated that the Ukrainian fighters might leave “one settlement”, or maybe two, but he also said: “We must win the war, and not the battle.”

“It is evident that our boys are gradually retreating to more fortified posts – we must hold back this horde.”

Russia launched an invasion of Ukraine late February, but has supported separatists in southern Donbas since 2014.

It abandoned its attempts to seize Kyiv, Ukraine’s capital, early in May and shifted to Donbas, which includes Donetsk, Luhansk, and Donetsk.

Continue reading: Severodonetsk – Fear, suspicion, and divided loyalties in a city where the situation is spiraling out of control

Ukraine’s president Volodymyr Zilenskyy stated that Ukraine will remain an independent state, and that it will not be broken.

“The only thing that remains is to be determined is the price at which our people will have a chance for freedom and how much Russia will pay for its senseless war against us.”

At least eight people died, including a 5-month-old baby. 17 others were also injured by shelling in Kharkiv, Ukraine’s second largest city.

* Ukrainian forces retreated from Svitlodarsk. Russian fighters occupied the local government building, and hung a Soviet Flag at the door.

* The Ukrainian military claims that 50 towns in Donetsk, Luhansk were shelled Thursday

* The US may give Kyiv a rocket-system with a range exceeding hundreds of miles. They have spoken to Ukrainian officials about the possibility of an escalation in case they strike inside Russia.

Alexander Vladimirovich Bobykin and Alexander Alexevich Ivanov, two Russian soldiers, pleaded guilty to the Ukrainian court to using a rocket launcher to bombard civilian infrastructure. They could spend up to 12 years behind bars

Zelenskyy also advised the West to stop playing with Russia and impose more sanctions. This was in spite of some frustration over the European Union’s slow progress towards a ban on Russian oil.

He stated that the “catastrophic unfolding events” could be stopped if the world treated Ukraine’s situation as if it was facing the same situation. If the powers were not to play with Russia, but pressed for an end to the war,

Russia receives EUR1bn per day from EU countries for energy supplies. He asked why others are able to stop the ban.

A ban would need to be approved by each of the 27 EU member countries, but Hungary opposes the idea because of its economic consequences.

“Pressure against Russia is literally a matter to save lives,” said Mr Zelenskyy.

“Everyday of procrastination and weakness, different disputes, or proposals to pacify the aggressor at his expense, merely means that more Ukrainians are being killed.”