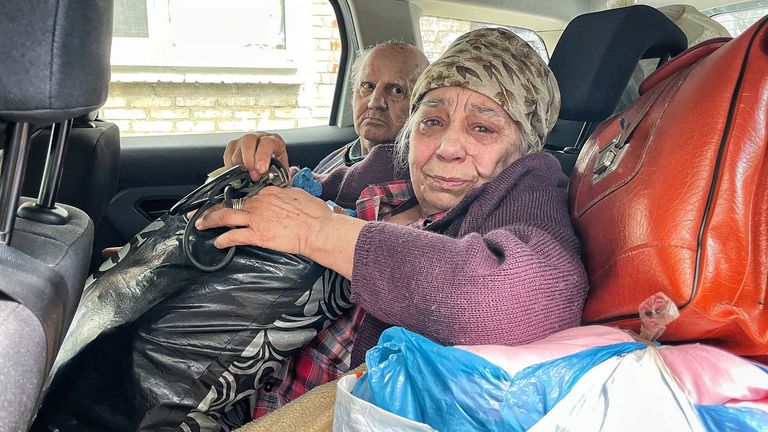 The mass graves found in Lysychansk show the extent of the slaughter in Donbas.

The long, freshly dug trenches that are empty are a testament to the dangers locals face in eastern Ukraine – and the terrors yet to come.

The Russian troops are marching forward and the deaths are increasing. There seems to be nothing the Ukrainian forces can do about it.

Every day, Luhansk police bring new corpses to the area to add to the growing number of war victims.

As we stood close to the informal gravesite, one of the officers told us, “There are men and women everyone’.

There is no time to mourn, and there are no traditional goodbyes. There is very little formality.

The 14 victims who were the latest victim – fourteen in total – were piled on top of one another, wrapped in white body bags that are inadequate to mask the smell of putrefying corpses.

Oleh Hryhorov (chief of Luhansk police) told us that everything is being kept on a database. It’s hard for him to think about the need to bury so many people. There is no other choice.

He explains, “We must understand what it means to not bury people.” It will cause infection. They are bodies and it’s warm (weather).

He said that they meticulously tried to identify the deceased and that they notified their relatives so they could obtain a death certificate.

He said, “With God’s will, the relatives will be able know where their relatives are buried so that they can bury them properly later.”

Nobody knows when that will be. It doesn’t look like it will happen anytime soon.

People and police in Lysychansk are able to hear and see the pounding of Severodonetsk nearby, which is now at the center of Russian military action.

The city’s centre is surrounded by huge plumes of black smoke. At the moment, all routes to and from the city are blocked by constant shelling and impassible. Reports indicate that Russian troops are inside the city walls, shooting at civilians as well as aid workers.

Lysychansk residents are watching nervously. They are aware that they will be next. They know the Russians will come for them.

When we talk to the aid workers, they are anxious and nervous. Georgiy Bystrov (a surgeon) shows us the boxes and boxes of donated masks and takes us to look at the syringes.

A little over a week ago the Russian military took control Rubizhne in the same Luhansk region. The head of the state administration Serhiy Hadidai stated that Russian troops had destroyed the area.

He said that there are no buildings left. The people of Severodonetsk, Lysychansk now fear that the same will happen to them.

As the police chief and his officers try to convince Katarina, 74 years old, to go with them so that they can move out of the city to safer areas further afield, we watch. She is sobbing all the way to her departure.

Her husband, a 84-year-old man with dementia, has been supporting her and her family by surviving on little food and no electricity. She is reassured by the police officers that she will be taken care of.

She has several plastic bags. They have nothing left after a lifetime of hard work and living here.

She weeps, “My parents survived the occupation.” It was nothing like this. “I wish I were dead.”