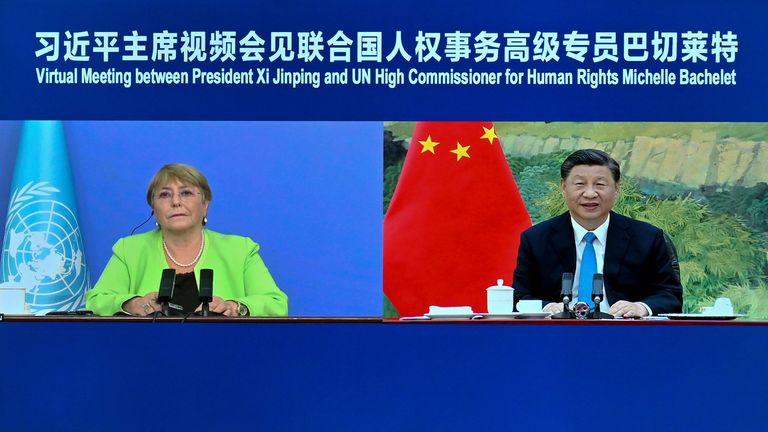 China’s leader has spoken out in defense of its human rights record and stated that the country is following a “path to human rights development that conforms with the trend of times”.

Xi Jinping is the leader of the Communist Party, which has no political opposition and tightly controls freedom speech. He criticised countries that lecture others about human rights and allegedly use the issue to politicise it.

Ms Bachelet is currently on a six-day trip to China. She stops in Xinjiang in remote north-western China, where the Chinese government has been accused of human rights violations and genocide of Uyghurs.

The US and others have criticised her trip, believing that China would stage-manage it and use it to propagandize.

Ms Bachelet, UN high commissioner for human right, stated that it was valuable to have direct discussions with Mr Xi, and other senior Chinese officials.

China’s Foreign Ministry reported that Ms Bachelet told Mr Xi that she admired China for its achievements in poverty and human rights. However, her office has disputed the claim and stated that she didn’t say it.

The Communist Party is well-known for its harsh treatment of activists, dissidents and minorities in Tibet and Inner Mongolia.

Ned Price, spokesperson for the US State Department, stated that the United States doesn’t expect China to grant Ms Bachelet access she would need in order to obtain an objective view of the human right situation in Xinjiang.

China guilty in genocide against Uyghurs

He said, “We believe it was a mistake for the high commissioner to agree to a trip under these circumstances, where he will not be allowed the type of unhindered, free and complete access that would be required to conduct a thorough assessment and to return with a full picture about the atrocities and crimes against humanity continuing in Xinjiang.”

During the meeting Mr Xi presented the Communist Party’s long-held position on human rights. He argued that China should choose its own path, not copy other countries’ models, and rejected outside criticism as interference in its internal affairs.

He was quoted as saying, “On the topic of human rights there is no perfect utopia.”

“We don’t need masters that dictate to other nations, let alone politicise and turn the human rights issue into an instrument, practising double standards, interference in the internal affairs other countries under pretext of human right.”

Ms Bachelet began her journey in Guangzhou in south-eastern China. Her itinerary also includes Urumqi and Kashgar, both located in Xinjiang.