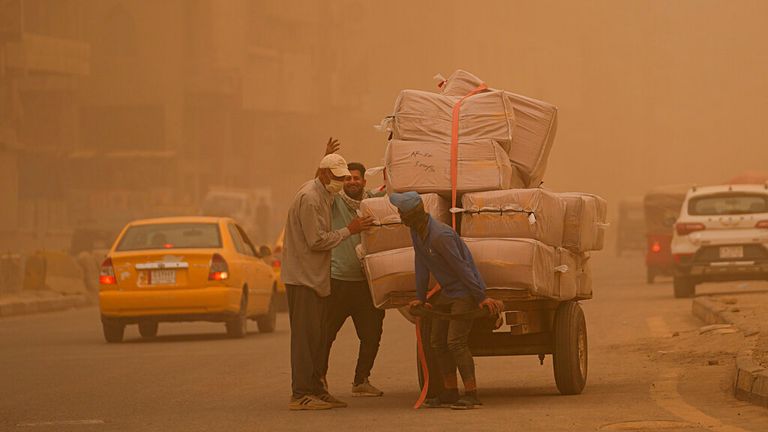 People were advised to stay home, and flights were disrupted in some parts of the Middle East following the latest in a series unprecedented sandstorms that swept across the region.

In the Middle East, thousands have been hospitalized by storms in recent weeks. At least one person died in Iraq and three in Syria.

Parts of Iran, Kuwait, and Saudi Arabia were also engulfed by the sandstorms that swept in almost simultaneously.

Sandstorms are triggered by seasonal winds, and are common in the late spring and early summer.

They have been occurring almost every week in Iraq this year since March.

Bright orange skies and thick grit signaled another stormy day for the Middle East, from Riyadh in Saudi Arabia to Tehran in Iran.

The day was declared a national holiday by the Iraqi authorities, who urged residents and government workers to remain home to prepare for the tenth severe storm that will hit the country within the next two months.

According to a statement, the health ministry had cannisters of oxygen stored at facilities in difficult-hit areas.

Jaafar Jotheri (geoarchaeologist, University of Al-Qadisiyah) said that “it’s a regional issue but each country have a different degree of vulnerability or weakness.”

A similar storm in the area earlier this month left at least three dead and many others with breathing difficulties.

Head of the Deir el-Zour health ministry’s office, Dr Bashar Shouaybi, said that hospitals were ready and that ambulances were available.

He stated that they now have 850 additional oxygen tanks and the medicine necessary to treat patients with asthma.

Kuwait International Airport had to suspend all flights Monday for the second time in a month because of dust.

The Saudi Arabian meteorological association reported this week that visibility in Riyadh would fall to zero.

Officials advised drivers to slow down.

The city’s emergency rooms were overflowing with 1,285 patients complaining that they couldn’t breathe.

Iran closed down its capital Tehran’s schools and government offices last week due to a sandstorm which swept through the country.

Numerous flights from western Iran were delayed or cancelled.

The blame has risen for dust storms and heavy pollution. A prominent environmental expert told local media that climate change and drought are to blame, as well as government mismanagement of water resources.

Iran has dewatered its wetlands to farm – a practice that is well-known for producing dust in the area.

Alireza Shariat is the head of an Iranian association of water engineers. He told Iran’s semiofficial ILNA news agency that he expects extensive dust storms in spring to be an “annual springtime phenomenon” like Iran has never seen.

Mr Jotheri said that the severity of storms is increasing in Iraq due to desertification, which has been exacerbated by low rainfall records. He said that the impact of a country with low elevations and many desert areas is nearly double.

He said that Iraq had lost more than two-thirds of its green cover because of 17 years’ worth of poor water management and urbanization. “That’s why Iraqis complain more about the sandstorms that are affecting their area than their neighbors.”