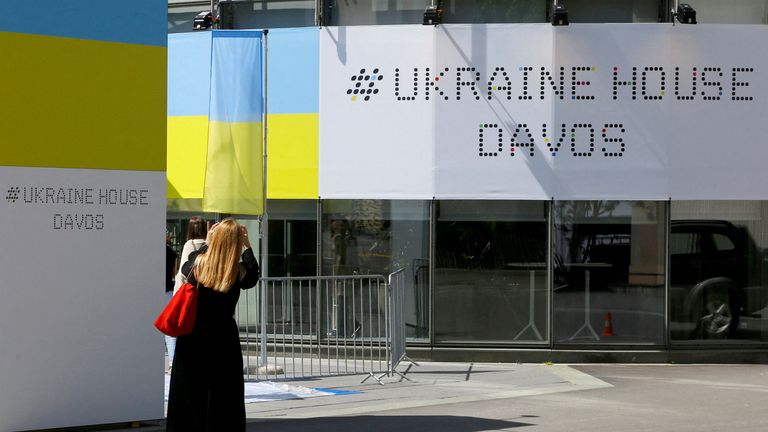 Sky News has learned that Europe’s dependence on Russian oil and gaz is financing the rape, murder and execution of Ukrainian children. This was according to Sky News’s MP and member of the delegation to Davos’ World Economic Forum.

Ivana Kylmpushtsintsadze is an MP and ex-minister who said that Western countries and companies must end “business as usual” with Moscow and called for more heavy weapons, tighter sanctions, and a total oil and gas embargo.

As part of the largest diplomatic mission to Kyiv since wartime, the MP is currently in Davos to relay the message to business and political leaders.

Ukrainian President Volodymyr Zilenskyy will speak at the conference via video link on Monday. This is the first in-person gathering of civil society, business and political leaders since 2020’s coronavirus pandemic.

She stated that she was here to send a message to her country: the need to stand together with Russia and stop trying to do business with them as usual in order to preserve everything we believe in, including prosperity, democracy, freedom, and liberty. They are vital for business and governments as well as people.

Ms Kylmpushtsadze stated that providing heavy weaponry is the most “humanitarian” contribution that the West can make and she would be asking states, including Germany to boycott Russian oil and gas.

She said, “I arrived to Davos via Berlin. It was not an easy day. But I am glad they are onboard with an oil embargo at minimum, that gives me a small hope they are seriously considering full gas embargo.”

“We are witnessing the effects of decades of dependence on Russia without giving any thought to it.

“If you pay Russian companies oil and gas, you are giving them the resources to destroy our towns, villages, kill our children, rape our elderly and babies, and destroy our country.”

The WEF will be addressed by Olaf Sholz, German Chancellor. He is one of 50 heads of state and national leaders who will speak to the WEF during the week. This address comes amid a security and economic crisis that Russia has triggered in the Alps.

At the moment, no senior British ministers plan to attend. Chancellor Rishi, as well as Business Secretary Kwasi Kwarteng, have decided not to attend a meeting where President Ursula von der Leyen (European Commission) and the prime ministers from Greece, Spain and Spain will address the gathering.

Russia will not be present. Russian presence will be absent.

The discussion will be dominated by Ukraine in Congress Hall and at the fringes of the conference. This conflict raises concerns about global energy prices, inflation, and food security.

The persistent theme of climate change will also be discussed. It has been pushed to the back burner since COP26 last January by the financial crisis, and the war. Both have seen countries seeking short-term alternatives to Russian energy sources with fossil fuels.

Alok Sharma, the president of COP26 will address delegates. John Kerry, the US climate envoy, will also be present. A platform will be shared by John Kerry and his Chinese counterpart XieZhenhua. This is a significant symbolic presence act if anything else.

Davos will be marginally more lavish than previous years, but there will be few dissenting voices at an event that extols liberal capitalism’s virtues.

There may not be much time left to reflect on the events that led to the current security, economic and food crises, as well as the slowing recovery of COVID.