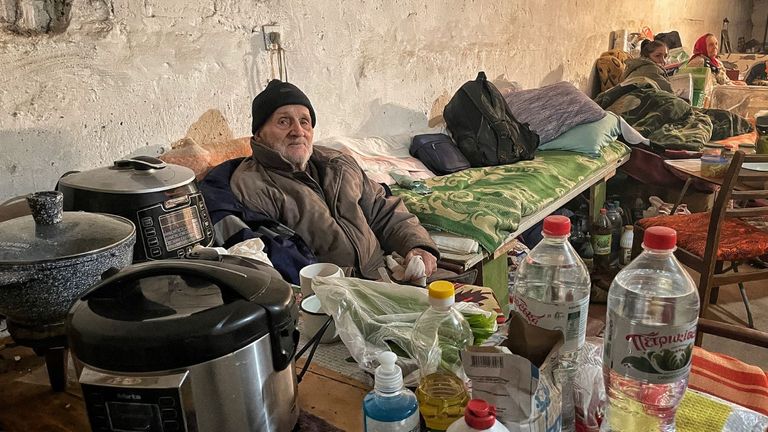 However, if you are an advancing army it is a deadly and powerful tactic and it’s being used in a brutal manner against the Soledar residents.

As the Russians intensify their attack on the Donbas region in eastern Ukraine, the topography of the town has changed dramatically over the past 72 hours.

The town has many craters and large pitted holes, including in its parks and high streets.

All offices, shops, the main administrative centre, the Sanatorium, and residential homes were left untouched.

The town is buzzing with the constant sound of war, with grad rockets (Russian weapons), coming in and going out all the time.

We meet a mix of residents who seem completely inured and those who are more edgy.

It is not the weather, but there is a shadowy, foreboding cloud hovering over Soledar. They can smell the Russian military moving towards them, and they face some difficult times if it continues the way it has in the past few days.


“No mother can accept this”

Nila is friendly and bright when we meet. She is almost certainly still in shock from the death of Valentina, her 28-year old daughter.

As Nila shows us the photo of her daughter, she hugs it and kisses it.

She says, “This is all that we have of her memory,” and then corrects herself. “No, her memories are in my heart as well as my mind. My heart can’t accept it. This is unacceptable to any mother.

She puts flowers and her favorite sweets in front. Valentina has not been buried by her. Her body was buried in Mariupol by a friend.

Nila says, “We do it because we can’t visit her grave.” She breaks down briefly, almost as though she is feeling weak. She says, “We must be strong.” “We live to support my other daughter, and our grandchild.” She is one of Ukraine’s strongest, most strong women.

She leads us to her second-floor flat. A bomb was dropped about 48 hours ago in a crater eight feet from the block.

She says, “This is what remains of our flat,” as she looks up at the floors of broken frames and blown windows on her block.

Her balcony is now open plan. Half of a wall has been removed and no glass is left intact.

As many others, she has moved down to the basement and to the extremely sturdy Soviet-built bunker beneath, to escape the increasing ferocious Russian attacks.

They are certainly skilled at building bunkers, perhaps because they know how devastating and destructive war can be.

The basement is homey with heat, lights, and lots of provisions. A budgie and very large dog are also present, along with mostly children and elderly people. They seem quiet and subdued.

Diana, a 10-year old girl who is bright and friendly and eager to meet us, is the most lively person at the event. Diana, 10, is still holding on to her dream of being a singer, and she entertains us all with her music.

She sings a beautiful and infectious rendition of a TikTok song she learned, which is in Russian. It seems to be about eating pasta.

It doesn’t really matter. It makes adults smile and is sure to make them smile. This adorable, innocent, and remarkably happy little girl charms all of us.

She says solemnly, “Obviously, it’s my wish that the war would stop.” It’s okay, the explosions are frightening. She smiles, “I’m glad there’s not school,” as her mother criticizes her.

Three explosions occur above ground as we are listening to Diana sing to our basement. They are not audible to us and she does not hear them.

We hope that it continues this way. However, the Russians continue to make advances in the Donbas. They are making progress, although it is slow. They want to capture as many Donbass as possible, and Luhansk, the half they have captured, is within reach.

They are unlikely to stop right now, unless forced to.