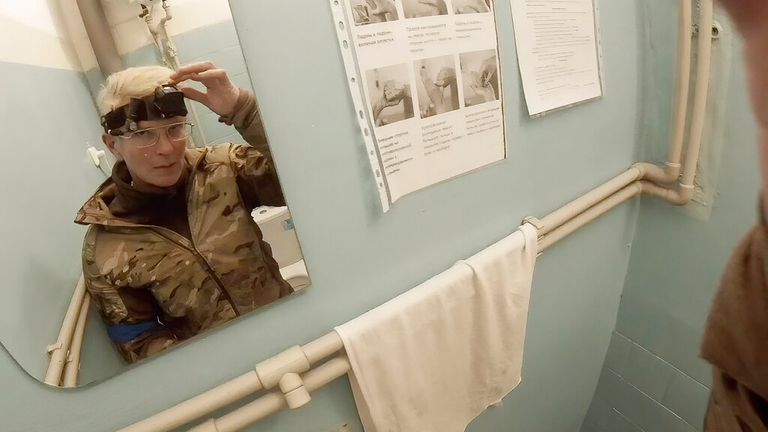 The horrors that took place in Mariupol’s ruined city after it was smuggled in a tampon is captured by a volunteer medic.

Yuliia Payevska is known as Taira in Ukraine. This moniker comes from her World Of Warcraft nickname.

The 53-year old recorded 256 gigabytes from her team’s efforts to rescue people from the brink.

She was supposed to use the bodycam in 2021 to make a Netflix documentary about the Invictus Games. But she ended up using it instead to document a warzone.

Ukraine news: Putin will not release vital food stocks to the world until sanctions are examined

As they were leaving the city in a rare humanitarian convoy, she managed to capture the harrowing clips for journalists from the Associated Press.

The data card was concealed in a tampon and the team passed through 15 Russian checkpoints to reach Ukrainian-controlled territory.

Russian soldiers then captured Ms Paievska, her driver, the next day on March 16th – one of many forced disappearances currently held in Ukraine.

She is currently a Russian prisoner and has not been seen in a while.

Russia has depicted Ms Paievska working for the Azov Battalion, a paramilitary volunteer militia that was formed in 2014 and has been fighting Russian forces during the Donbas War.

This claim is consistent with Moscow’s narrative of trying to “denazify Ukraine”, but there is no evidence to support this assertion. Friends and colleagues of Ms Paievska say that she has no connections to Azov.

Ms. Paiveska’s bodycam footage shows her trying to save injured Russian soldiers and civilians at a military facility where she led the evacuations.

Two Russian soldiers were taken out of an ambulance by a Ukrainian soldier in a clip that was recorded on March 10.

The one in the wheelchair is the other. He is also on his knees with his hands behind his back and an injured leg.

As winter hats cover their eyes, they wear white armbands.

Ms Paiveska says to a Ukrainian soldier, “Calm down, calm yourself.”

A woman asks her “Are we going to treat Russians?”

She replies that they won’t be as kind to them, but she said: “But I couldn’t do any other.” They are prisoners in war.”

Ms. Paiveska is both a star athlete in Ukraine and the person who trained the volunteer medic force.

This footage, which she captured from 6 February to 10 März of a city under siege, is an intimate recording that became a global symbol for the Russian invasion of Ukraine and Ukrainian resistance.

Ms. Paievska documented the attempts to bandage an open head wound of a Ukrainian soldier on the 24th day of Russia’s invasion.

Two days later she ordered her colleagues to wrap a wounded soldier in blankets.

She says, “Cover him because his shaking is alarming.” She calls the young man “Sunshine”, a favorite nickname for the many soldiers she cared for, and asks him why he traveled to Ukraine.

He tells her, in some confusion: “You’re taking good care of me.” He responds, “We treat all equally.”

Two children, a brother-and-sister and their mother, were seriously wounded in a gunfight at the checkpoint that killed their parents.

He turns away and she cries.

Ms. Paievska is just one of hundreds of prominent Ukrainians kidnapped, captured or held hostage, along with activists, human rights defenders, and local officials.

It is believed that five victims were found dead, and some others may have been tortured.

The office of Ukraine’s Ombudswoman reported that it had received reports about thousands of missing persons as of April 30, with 528 of these people believed to have been captured.