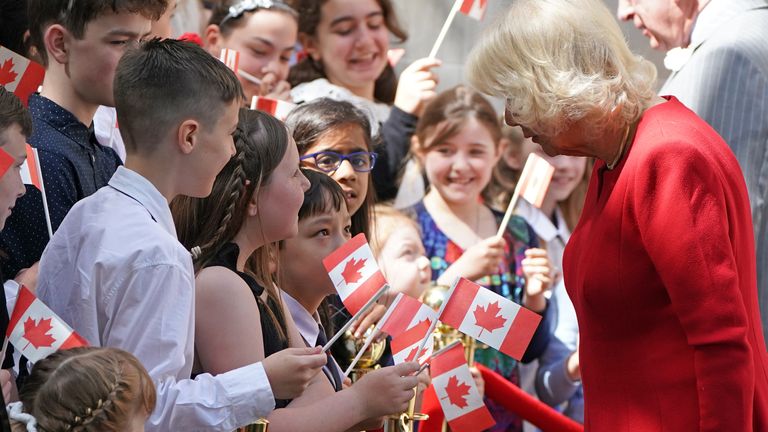 As they embark on their tour of Canada, the Prince of Wales and Duchess Cornwall will reflect upon the tragic legacy of Canada’s scandalized residential schools.

Prince Charles and Camilla will be visiting the Commonwealth on a three day trip to celebrate the Queen’s Platinum Jubilee.

Charles will likely speak of the Queen’s “profound love she feels for Canada” but it is also expected that the royal couple will acknowledge the treatment of indigenous people through the state-sponsored residential school system.

In 2015, more than 150,000 children from indigenous families were forced to leave their homes in what investigators called “cultural Genocide”.

They were sent to Christian boarding school from the late 19th century until the 1970s, where they were physically abused and raped, malnourished, and had their hair cut. Many were also beaten for their native languages.

Many children were killed by disease or other causes and many of them never saw their families again.

Charles and Camilla will participate in a “solemn minute of reflection and prayer” at the garden of victims of the system within hours of landing in St John’s, Newfoundland and Labrador.

In 2008, the Canadian government officially apologised to the system.

Chris Fitzgerald, deputy private secretary of the prince for foreign affairs said that the couple will first participate in a solemn moment in reflection and prayer at The Heart Garden… with Indigenous leaders and community members in spirit of reconciliation

“Heart Gardens are dedicated to all the indigenous children who were sent to residential schools, in honor of the survivors and their families.”

Mr Fitzgerald stated that “Throughout the tour their royal highnesses would take the opportunity to continue engaging with indigenous communities.”

After recent criticisms during previous royal overseas visits, their tour of Canada is now complete.

Campaigners called for the Royal Family to apologise for the atrocities committed by the slave trade while they were on trips to the Caribbean.

Queen statues toppled in Canada over treatment of indigenous children

Some elements of William’s and Kate’s tour were also criticised as being too colonial and outdated.

There has been increased interest in the future of Commonwealth realms after Barbados severed all ties to the royal family in November.

According to research from the Angus Reid Institute, 55% of Canadians support a constitutional monarchy for as long as Queen reigns. However, this number drops to 34% for the same arrangement under King Charles.