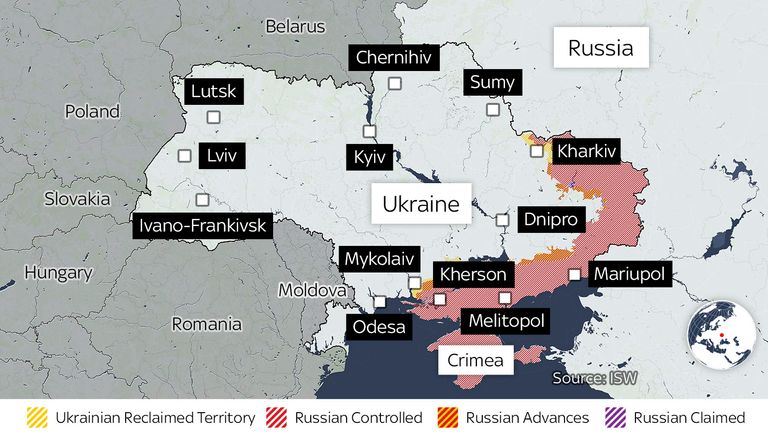 Ukraine can win the war against Russia, NATO’s secretary general has said, insisting that Russia’s invasion is “not going as Moscow had planned”.

Jens Stoltenberg was speaking on Sunday to a meeting of NATO member countries, although he addressed them via video as he was recovering from COVID-19.

He said: “Russia’s war in Ukraine is not going as Moscow had planned.

“They failed to take Kyiv. They are pulling back from around Kharkiv. Their major offensive in Donbas has stalled.

“Russia is not achieving its strategic objectives.

“Ukraine can win this war.”

It comes as Finland and Sweden move closer to NATO membership, reversing decades of neutrality despite strong objections from Russia.

But one of the main factors has been the fierce defence mounted by both professional Ukrainian soldiers and civilians.

Ukrainian President Volodymyr Zelenskyy was also confident, vowing that his country would be ready to host next year’s Eurovision following their weekend victory in the song contest.

He said: “Step by step, we are forcing the occupiers to leave the Ukrainian land.”

Russian troops have retreated from around the city of Kharkiv, although shelling continues in the wider Kharkiv region.

One Ukrainian battalion published a video of its soldiers reaching the border with Russia, with one of the men saying the unit had gone “to the dividing line with the Russian Federation, the occupying country. Mr President, we have reached it. We are here.”

The UK Ministry of Defence said: “Under the current conditions, Russia is unlikely to dramatically accelerate its rate of advance over the next 30 days.”

Key developments:
• NATO and the US say they are confident Turkey won’t hold up membership applications from Finland and Sweden to join the alliance
• Ukraine blew up two railway bridges that had been seized by Russian forces in the eastern region of Luhansk
• Ukrainian prosecutors have launched a criminal investigation into Russia’s alleged use of restricted incendiary bombs at the Azovstal steelworks in Mariupol. International law bans their use to target enemy personnel or civilians
• The city of Mariupol is largely under Russian control but several hundred Ukrainian troops remain at the steelworks, refusing to surrender. Their wives have called for the world to secure their release

Russian forces might have failed to take the two largest cities – Kyiv and Kharkiv – but in the south-eastern industrial heartland – the Donbas – Ukraine has fought Russian-backed separatists for eight years and the fight continues.

During the weekend, Russian forces hit a chemical plant and 11 apartment buildings in Siverodonetsk (in Donbas). Two people were killed and residents were told to stay in underground shelters.

In Ukraine’s western Yavoriv district, near the border with Poland, Russian missiles destroyed a number of military facilities. The area is a major gateway for weapons supplied to Ukraine by the West.