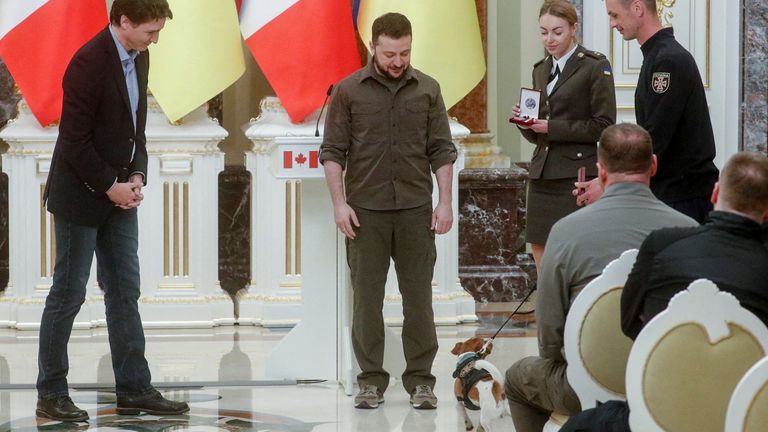 His bravery was recognized by a mine-sniffing canine, who was credited with finding more than 200 explosives during the Ukrainian war.

On Sunday, Patron, a dog symbol of Ukrainian patriotism and whose tireless work prevented many injuries and deaths, was presented with a medal.

At a news conference held in Kyiv, Mr Zelenskyy received the award along with Canadian Prime Minster Justin Trudeau.

The patron barked and wiggled his tail, prompting laughter among the audience. Mr Trudeau looked for a treat for his dog and sat on his lap.

Mr Zelenskyy stated: “Today I want to honor those Ukrainian heroes that are already clearing our land from mines…together our heroes, a fantastic little sapper, Patron – who not only helps to neutralise explosives but also teaches our children the safety rules in areas where there’s a danger of mines.”

The award was also given to Myhailo Iliev (a major in Civil Protection Service).