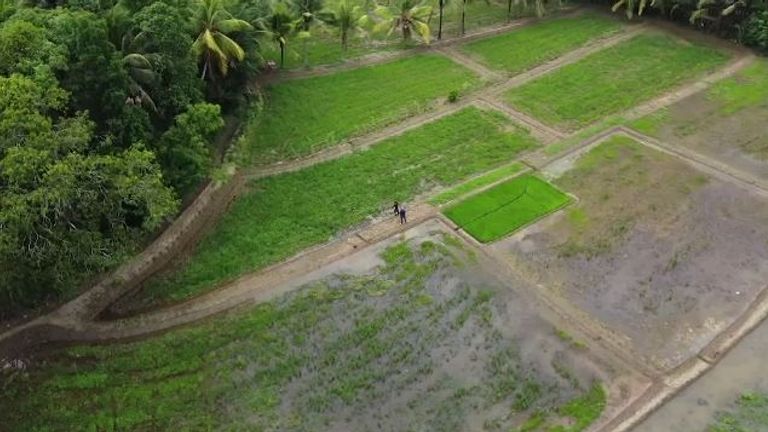 The roots of Sri Lanka’s impending food crisis can be seen in the rice paddies east from Colombo.

It’s planting season here. This coincides with the arrival of the seasonal rains that will flood the paddies. But, in the fields along the road to Rambukkana cultivation has just begun.

Only a few plots were planted with the pale green seedlings. The rest of the plots still have the wet remnants of last year’s crop or are empty save for a soupy brown slop.

They are often unable to afford or find the diesel or kerosene needed for tractors or rotavators to turn their soil.

Ravindra Wickramrathana still cares for his young crop outside Rambukkana. The seedlings are laid out in strips, much like turf, on the terrace and regularly soaked in pink watering cans.

He explains the reasons why this year’s crop is at risk while standing in the middle the four paddies upon which his livelihood rests.

Each paddy must be turned twice before it can be planted. This is a task that takes a few hours using a tractor, but two days if the soil is dug manually. This is before you plant the seedlings. It takes 10 men an entire day to do this.

This year, however, this work might not prove to be worth it. The government banned imports of chemical fertilisers last year, which has caused yields to plummet and made it unlikely that the harvest will cover labour costs.

Although the ban on imports of fertilisers was intended to preserve the country’s declining foreign currency reserves, it has had the unintended consequence of threatening food security.

Ravindra said that 25% of the yield was lost after the fertilizer ban. We can’t get the same yield using organic fertiliser. Our labour costs more than what our harvest will bring, so there is no profit.

“I don’t know how to think about the future. The price of everything has risen, labour costs have risen, and if we can’t pay our costs, how can we keep farming?” We don’t know what to do.”

Because farmers aren’t only responsible for their families’ food, but also for the country’s overall well-being, what happens in Ravindra’s paddies is crucial. They were able to rely on their own harvests and would sell any surplus to rice mills for processing.

Due to lower yields, Sri Lanka’s prices in shops and markets have tripled. Sri Lanka is now more dependent on imports than it can afford.

The yields of fruits and vegetables are also falling and overall food inflation is at 50 percent.

Sri Lanka could fall into ‘anarchy

According to Colombo’s official weekly tally, staple prices in Colombo’s wholesale market have risen by almost 40%, 50% and 60% respectively, while limes are up 240% and potatoes, 66%, and 24%, respectively.

Fuel shortages are a major factor in these high prices. They also increase the cost of transporting produce from rural areas into cities.

Add to that a constant shortage of liquid natural gases used for cooking, even more so during the rainy season when the firewood gets soaked, and Sri Lankans are facing a crisis of cost of living. This has turned an economic crisis into one of political proportions.

This weekend, President Gutabay Rajapaksa declared a state emergency, giving him the power of suppressing further protests. However, Sri Lanka’s finance Minister admitted that the country only has $50m worth of foreign currency available.

This is barely enough to cover one month’s fuel imports. The country is now dependent on loans or aid from China and India to help it negotiate a bailout deal with the International Monetary Fund and restructure its annual debt repayments of $7bn.

This island, which is lush and green, could soon be facing food shortages. It’s the most obvious sign of the trouble it’s in.